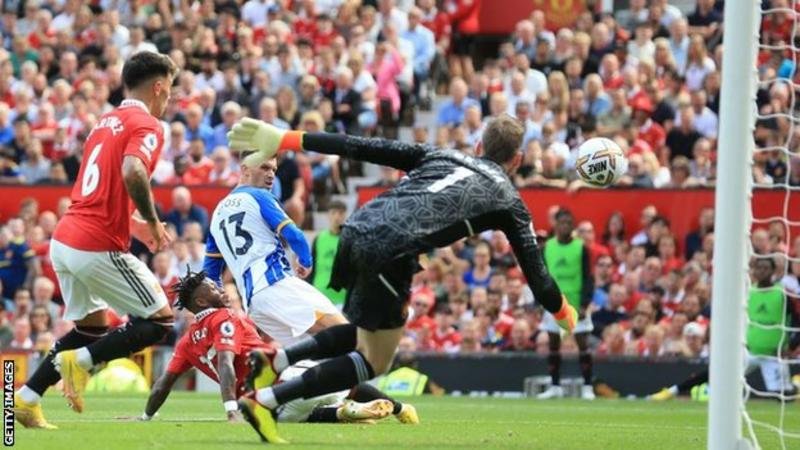 Erik ten Hag endured a nightmare first competitive game in charge of Manchester United as they lost at home to Brighton in their opening Premier League match of the season.

New signings Christian Eriksen and Lisandro Martinez started for the hosts, with Cristiano Ronaldo – their top scorer last season – on the bench.

But there were familiar problems for United as they were punished for a lethargic start when Pascal Gross fired in from Danny Welbeck’s dangerous ball.

It got worse for United when Gross found the target again before half-time, firing in from close range after David de Gea parried Solly March’s shot.

United, who were better in the second half, got a lifeline when Alexis Mac Allister turned into his own net as he attempted to keep the ball out after it bounced off Diogo Dalot’s back.

Brighton had to withstand some heavy pressure but managed to hold firm and secure a first win at Old Trafford.

With the sun shining and a new manager in place, there was a sense of optimism around United before kick-off.

Ten Hag has started to impose his personality on the club, to the extent of ousting some of the ‘prawn-sandwich brigade’ from their corporate hospitality suites so his players could have their pre-match meal.

Yet so many of the old issues remained. Protests against the United owners before kick-off meant the club shop had to be shut.

Co-chairman Avie Glazer was paying a rare visit and would have heard the songs to his left calling for his family to get out of the club.

On the pitch, there was no cohesion despite decent debuts from Christian Eriksen and Lisandro Martinez.

Brighton, well drilled and fluid, took advantage. Leandro Trossard volleyed into the side-netting within 15 seconds of the start and United failed to impose themselves on the game until it was far too late.

For the opener, Welbeck’s run split Maguire and Martinez. The latter came across from the left to cover the cross, leaving a huge hole in the six-yard box and, as United’s defence scrambled to plug the gaps, Gross was on his own to tap home at the far post.

He was in a similar position but on the other post when Solly March cut inside and unleashed a low shot, which keeper David de Gea turned into his path.

The boos that accompanied the half-time whistle were predictable and deserved. Within eight minutes of the resumption, Ronaldo had been introduced to try and lead a rescue mission.

The 37-year-old had a negligible impact. It was another Portuguese, Diogo Dalot, who created the confusion that led to United’s goal. But by the end it was Brighton who looked more likely to score again.

Amid the inevitable soul-searching for United at this dreadful result, Potter’s influence at Brighton should not be underestimated.

He has lost Yves Bissouma and Marc Cucurella for a combined £88m from the side that beat United in May. Director of football Dan Ashworth has also gone. None of Brighton’s summer signings started this match.

But they moved the ball with a purpose absent from United, while Welbeck was a particular threat against his old club.

Gross and Trossard were both superb and, even without Bissouma, Brighton controlled midfield to ensure United were not able to turn their industry into something more tangible.

Little wonder the jubilant visiting fans chanted “can we play you every week?”.