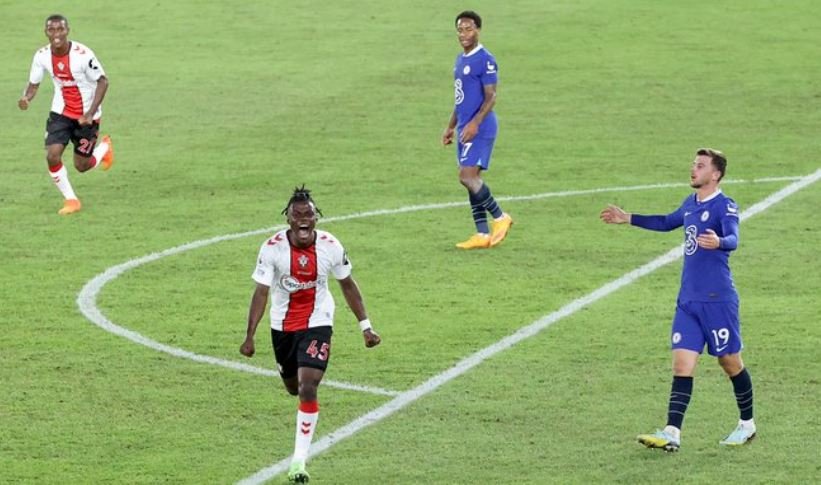 Southampton came from behind to earn their second win of the fledgling Premier League season and move above a Chelsea side lacking cohesion and a cutting edge at St Mary’s.

Raheem Sterling is the Blues’ top scorer and got Thomas Tuchel’s side off to a promising start with his third goal in two games thanks to a calm swivel and finish in the 23rd minute.

From then on Southampton were the better side and scored what proved to be the winner before the break, when Romain Perraud picked out Adam Armstrong and his effort deflected off Kalidou Koulibaly and into the net.

Ralph Hasenhuttl’s outfit climb to seventh as a result of the deserved victory, level on seven points with Chelsea but above them on goals scored.

Southampton are so often a breeding ground for young players looking for a break in the top flight and appear to have recruited another gem in Lavia, who spent two years at City after leaving Anderlecht, before joining the Saints this summer.

The midfielder and 20-year-old German defender Armel Bella-Kotchap, another shrewd acquisition, provided the foundations for an impressive Southampton performance that earned them a first win over Chelsea in three years and first at St Mary’s since March 2013.

Chelsea had been the better side early on and capitalised through Sterling, but a slight mix up saw Cesar Azpilicueta put the ball behind for a corner and it was only cleared as far as Lavia – the 18-year-old Belgian took a touch before rifling a strike past Mendy from the edge of the area.

The hosts were outdone in terms of possession in the first half but looked far more efficient with the ball after Lavia’s leveller and a swift move led to Armstrong putting them ahead in added time from Perraud’s cutback.

That Lavia – the first player born in 2004 to score a Premier League goal – had to be replaced just before the hour mark after pulling up will be a concern for Hasenhuttl, with the youngster already proving to be an integral part of his side.

“It will not be the last one coming here and showing up,” said Hasenhuttl of Southampton’s recruitment of young, promising players.

He added: “I said it from the first day that we have the feeling that we have a team that is young but there is a lot of empty space on the hard disk and they can learn.

Bella-Kotchap, who made a great recovery tackle on Sterling early in the game, and Mohammed Salisu were formidable at the heart of Southampton’s defence and gave Chelsea little encouragement of finding a way back.

At the other end, Marc Cucurella stopped Southampton adding to their lead with an instinctive block from Mohamed Elyounoussi’s header and Thiago Silva then cleared a Salisu effort off the line as the hosts continued their encouraging start to the campaign.

Raheem Sterling scored his third goal of the season for Chelsea

Tuchel spoke of having a depleted squad before this fixture but also admitted he will be happy to have “no more distractions” once the window closes on Thursday.

A combination of suspensions, injuries and players either departing or yet to arrive means the German boss has been left short in certain areas and he started with Hakim Ziyech, someone heavily linked with a move away from Stamford Bridge.

The visitors started brightly and when Sterling showed composure to put them ahead it looked as if Chelsea may be coasting to a second successive victory.

But Tuchel says his side only played for “20 to 25 minutes” and once the door was open for Southampton the visitors struggled to create clear-cut chances.

They lacked fluidity and urgency in attack, bringing on Armando Broja – a player on loan at Southampton last season – to try and add a focal point up top.

The 20-year-old striker had a header tipped wide by Saints goalkeeper Gavin Bazunu and Kai Havertz also nodded over when well placed, but Tuchel said his side were too easily “pushed off balance” by their opponents.

As the expected signing of Leicester defender Wesley Fofana tips the Blues’ summer spending beyond £200m before the deadline, there will be pressure on the German boss to make things click sooner rather than later.