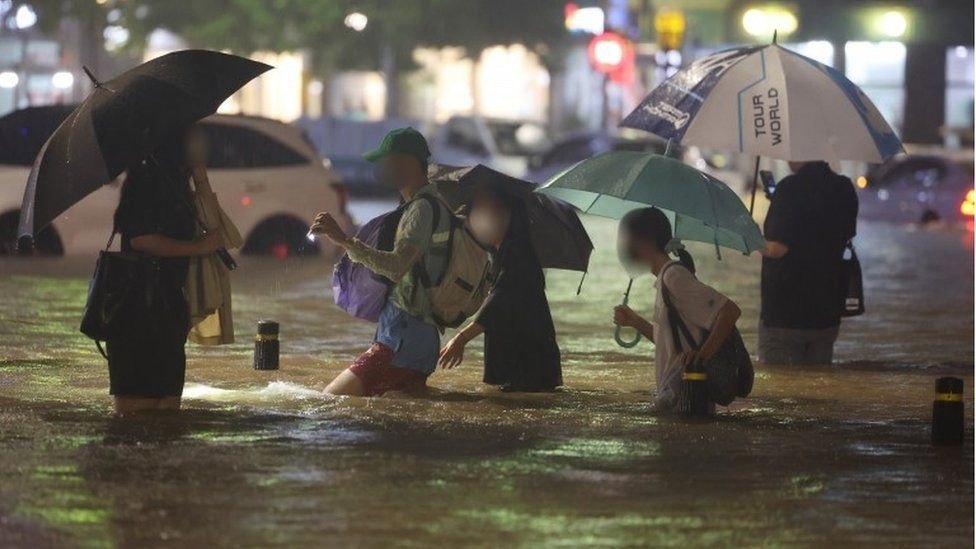 In Seoul, the capital of South Korea, floods brought on by excessive rain has resulted in at least eight fatalities and 14 injuries.

The heaviest rainfall in some locations in 80 years, according to Korea’s meteorological agency.

The rain was expected to last for several days, according to weather officials.

According to local sources, the three victims were residing in a banjiha, or semi-basement apartment.

Three people were killed when floodwater submerged their semi-basement flat

Rescue officials said they were unable to access the apartment as floodwaters had risen to waist-high levels on the street.

According to the Yonhap news agency, rain fell in parts of Seoul, the western port city of Incheon, and the neighbouring Gyeonggi province on Monday night at a rate of nearly 10 cm per hour.

According to Korea’s Meteorological Administration, Seoul’s Dongjak district reported more than 141.5 mm of rain per hour, which is the greatest rate since 1942. (KMA).

A person who was electrocuted, another who was discovered underneath a bus stop, and a third who perished in a landslide were among the other victims. At least 14 people were hurt, and six more were said to be missing.

Yonhap reported at least 163 people in Seoul have been left without a place to live and have sought refuge in schools and public spaces.

Public transit was also impacted by the rain, as Seoul and Incheon’s railroad services had to be suspended due to flooded tracks.

The KMA stated that it would continue to issue heavy rain warnings for Seoul and the neighbouring metropolitan areas and that it anticipated that rain would fall in the country’s centre at least through Wednesday.