Protests in Kuje prison over death of inmate
Advertisement 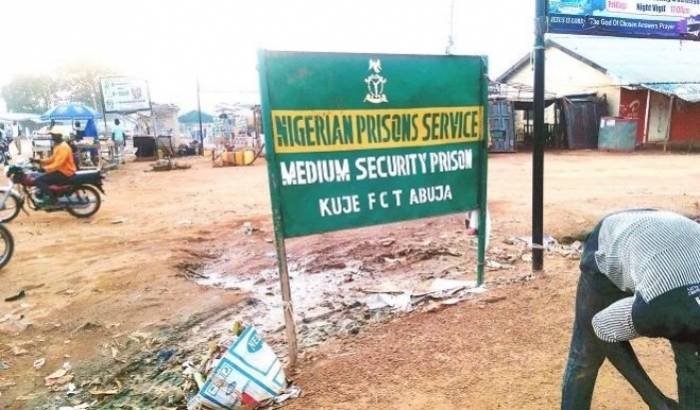 There were reports of protests on Monday at the Kuje medium security correctional facility over the death of an inmate.

The reports stated that the inmate passed away because he did not receive prompt medical assistance.

The death was acknowledged by prison officials in a statement, but they also claimed that proper medical care had been given.

Chukwuedo Humphrey, a spokesperson for the penitentiary system, issued a statement that was silent on any unrest but noted that “a calm prayer session” had been performed in honour of the inmate.

The statement read, “The convict was admitted into Kuje Correctional Center in 2019 and upon necessary medical examination, he was diagnosed of some chronic diseases.”

“He was immediately placed on special medical management by a combined team of medical personnel in the facility as well as occasional referrals to the University of Abuja Teaching hospital, Gwagwalada, Abuja when necessary.

“Unfortunately, when the inmate’s health deteriorated over the weekend, all effort by the medical personnel to resuscitate him failed.

“A peaceful prayer session is being organised by the staff and fellow inmates of the deceased for the repose of his soul.

While offering his sympathies to the deceased inmate’s family and friends, the Command’s Controller, Ahmed Musa Ahmed, reaffirmed his commitment to prioritising the health and general wellbeing of both inmates and staffs.

“He further advised those on special medical attention to ensure strict adherence to expert instructions to overcome health challenges since drugs are available to them at no cost.”

Another source told correspondents that the inmate died of kidney disease.

“The inmate was sick. He died this morning. He was at the hospital last week where he was suspected to have kidney issues. That is all I can say about what you are asking me,” the source said.

“The guy has been sick for weeks now, but the situation deteriorated last night and the wardens refused to attend to him until he gave up the ghost around 6:28 am this morning,” a prison official also told reporters.

Hushpuppi: Court dismisses application for Abba Kyari extradition to US