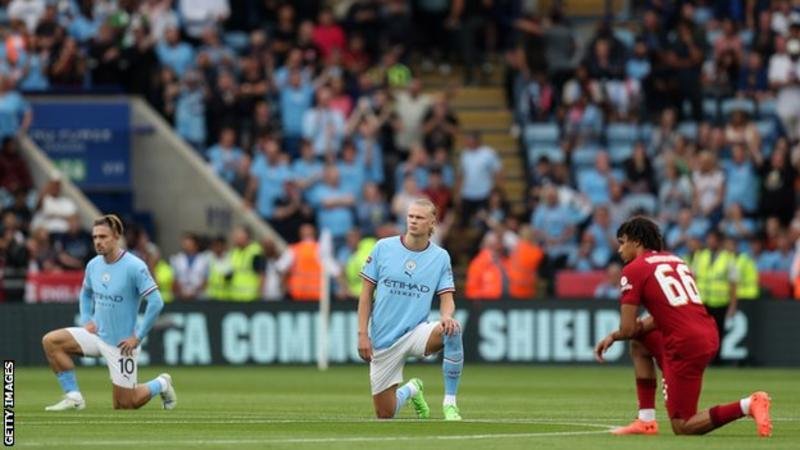 Premier League players will stop the pre-match anti-racism gesture of taking the knee before every match.

Top-flight clubs started taking a knee to support the Black Lives Matter movement, which rose to prominence following the death of George Floyd in the United States in May 2020.

Premier League captains took the decision after consulting with players.

The gesture will instead be seen before certain rounds of games, including the Boxing Day fixtures and cup finals.

Players and staff will also take the knee before the first and last matches of the 2022-23 campaign as well as dedicated No Room for Racism match rounds in October and March.

The gesture took place before the Community Shield between Liverpool and Manchester City last Saturday.

Captains and players are said to believe that ‘less is more’ – hoping when the knee is taken it will have greater impact.

“We have decided to select significant moments to take the knee during the season to highlight our unity against all forms of racism and in so doing we continue to show solidarity for a common cause,” said a joint statement from the Premier League captains.

“We remain resolutely committed to eradicate racial prejudice, and to bring about an inclusive society with respect and equal opportunities for all.”

However, Crystal Palace forward Wilfried Zaha stopped in February 2021, saying at the time that “at the moment it doesn’t matter whether we kneel or stand, some of us still continue to receive abuse”.

Swansea City and Bristol City recently announced they would be stopping the action as well.

“For two years now taking the knee has become part of the pre-match ritual. The players fear it’s losing power and momentum and we will see it take place in a different format.

“It’s up to the players to decide themselves and we support them in whatever decision they make, as do the Premier League clubs.”

Prior to the decision to scale back the taking of the knee, anti-racism charity Kick It Out’s chairman Sanjay Bhandari said he would support the players in whatever decision they made.

“We should be spending more time on why players take a knee rather than whether they take a knee or not,” said Bhandari on Tuesday.

“The reason they take a knee is because we are not living in an equal society. There is discrimination. There is a huge amount of online abuse.

“It is using their platform to raise awareness and says to the people in power you need to act. Whatever they do, I will support any kind of peaceful gesture.

“The point is we still need to be doing something to raise awareness and to keep things like the online safety bill on the agenda.”

He added: “We are talking about how we tackle discrimination and how we create greater inclusion in football and around football with governing bodies and clubs.

“There seems to be this great intent in wanting to do more. We have to tap into that.”