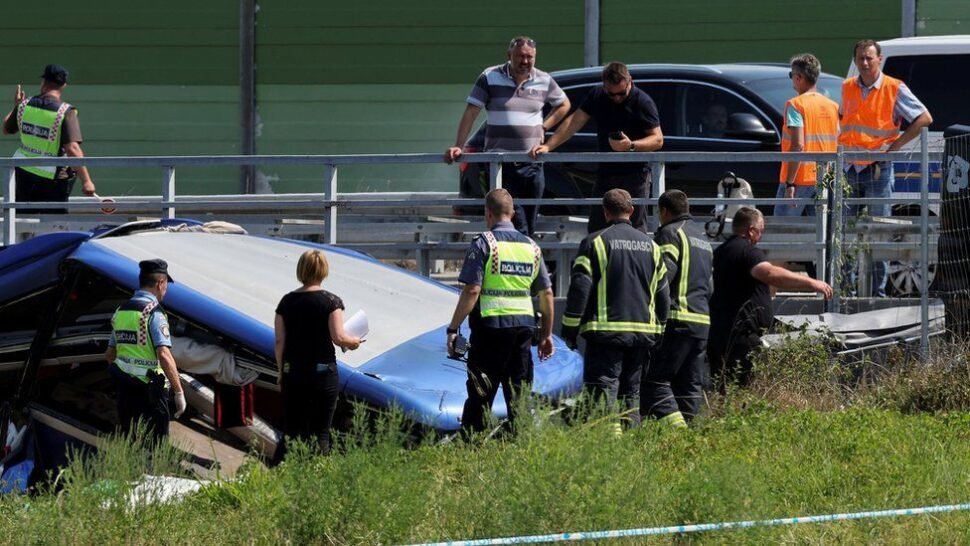 The bus ended up in a ditch by the roadside

Twelve people have been killed after a bus carrying Polish pilgrims veered off a road in Croatia on Saturday and ended up in a ditch.

All 32 surviving passengers are said to be injured, 19 of them seriously.

The trip, organised by the Brotherhood of St Joseph Catholic group, included three priests and six nuns. They were travelling to Medjugorje, a Catholic shrine in Bosnia.

The passengers were all Polish adults, said the Polish Foreign Ministry.

The bus left from the Polish city of Czestochowa on Friday night following a prayer service. The passengers were from various regions of Poland, the foreign ministry said.

A crane removes the bus with Polish license plates that slipped off a road, from the scene near Varazdin, northwestern Croatia

The accident happened at around 05:40 local time (04:50 GMT) when the bus they were travelling in veered off the A4 road between Jarek Bisaski and Podvorec, north-east of Zagreb.

Two Polish ministers are travelling to Croatia in response to the catastrophe, and Poland’s justice minister and prosecutor general have directed the Warsaw Prosecutors Office to begin an investigation into the circumstances leading up to the disaster.

Although 11 deaths were first reported, one more passed away later in a hospital.

Davor Bozinovic, the interior minister for Croatia, stated that “several of the injured passengers are battling for their life.”

Andrej Plenkovi, the prime minister of Croatia, sent his sympathies to the relatives of the victims and said in a tweet that the emergency services were doing everything they could to assist.

Poland has seen a huge increase in the number of pilgrimages to the little town of Medjugorje as a result of rumours that local kids there had a glimpse of the Virgin Mary there in the 1980s.