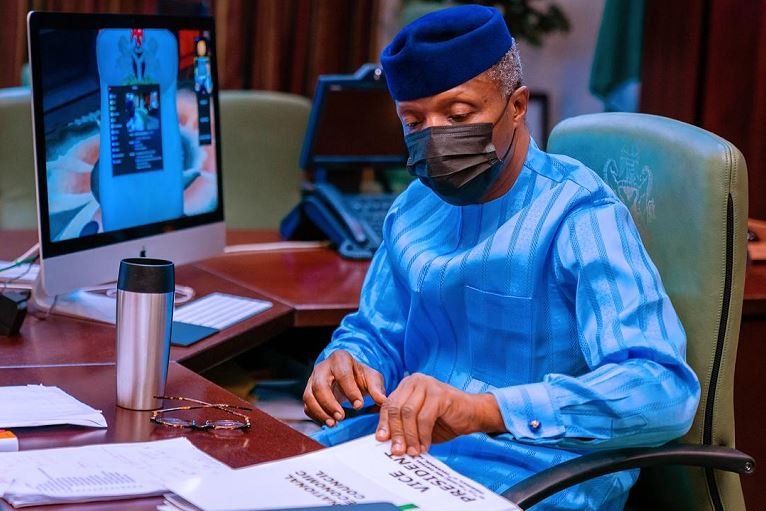 I have watched Nigerians ignorantly delegate the handling of the Nigerian economy to the Vice President’s Office under Prof. Yemi Osinbajo over the last seven years, usually I laugh it off, but when Adams Oshiomhole, a former governor and labour leader also goofed on the subject matter, I reasoned it was time we considered the issue more seriously.

Let me break this economy thing down. First, as Acting President, Prof. Osinbajo did oversee the economy. He held meetings and called the shots and truly Nigeria’s economy took a new turn. Food prices began to dwindle, the naira rose against the dollar, ease of doing business improved, etc.

Then there was the Economic Management Team (EMT) which he chaired up until 2019 when it was dissolved and replaced with the Presidential Economic Advisory Council. It is the EMT that Oshiomhole erroneously claimed Prof. Osinbajo chairs till date during an interview on Arise TV.

The Economic Management Team was an initiative of Prof. Osinbajo. The goal of the team was to improve Nigeria’s economy such that it could compete with the rest of the world. However, the team lacked the authority to make final decisions, that power rested with the President.

It is important to note how Nigeria’s economy works and to state categorically the drivers of the economy.

The drivers of the economy of any country are usually the central bank, state-oil company, customs, immigration, port authority, agriculture ministry, trade and commerce, foreign affairs, etc. These components of government account for the revenue allocation of government and largely drive the economy from a government point of view. The private sector is a different ball game altogether.

Now, the listed subsystems above do not report to the Vice President, so how is he expected to manage or handle the economy? The thinking that Osinbajo handles the economy is uninformed and completely wrong. He does not, and for a large period during the Buhari administration, he did not oversee the economy.

Yes, he had spells in charge of the economy and I think the results were clear for even the blind to see. They were staggering and they had telling effects on our livelihood. He sought to digitalise processes that would impact the common man.

The second point which many allude to is the fact that Prof. Osinbajo is the chairman of the National Economic Council (NEC). I understand that many may be misled by the presence of ‘Economic’ but there’s very little mind-blowing economic decisions that are taken there.

Here is the composition of NEC: The Vice President is the chairman and the members are the 36 State Governors; the Governor of the Central Bank of Nigeria and other co-opted Government officials. According to the website of the State House, the NEC, which meets monthly, has the mandate to “advise the President concerning the economic affairs of the Federation, and in particular on measures necessary for the coordination of the economic planning efforts or economic programmes of the various Governments of the Federation. This is in line with the provision made by the Constitution of the Federal Republic of Nigeria, 1999, as amended; Section 153(1) and Paragraphs 18 & 19 of Part I of the Third Schedule.

Again, the Council is only an advisory body. If the governors come crying at the Council about how they cannot pay salaries or why the Federation Account Allocation Committee (FAAC) is dwindling, the VP, who is chairman of NEC, does not have the powers to approve a Paris Club loan neither does he have the powers to order Customs to make available their earnings.

How then does the Vice President handle the economy? It is understandable when citizens say Buhari will handle security and Osinbajo will the economy, we can excuse them for not knowing how government works and who has the powers to do what, but for a former governor and labour leader to mouth this rhetoric is beyond ludicrous.

Let’s not pretend like Prof. Osinbajo is the first Vice President in the fourth republic. During the Obasanjo administration, he had a minister in charge of the economy and that’s because as President he had the powers to do so, same applies to the current administration. President Buhari has the prerogative to swap the EMT for the Presidential Economic Advisory Council which comprises of some of the finest Nigerian economists.

The least our political class can do is to keep abreast of what is happening in government instead of regurgitating outright ignorance just to score cheap political points.

Seun Bisuga is a journalist, writer and social media analyst