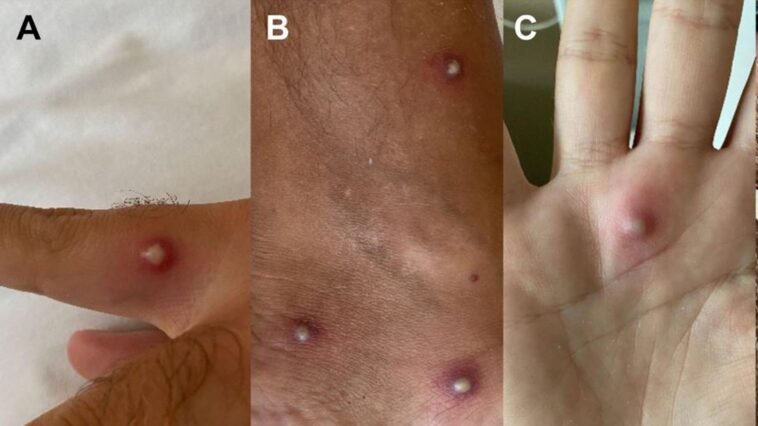 Health authorities have been warned to keep a look out for monkeypox occurring in patients at the same time as COVID-19 after a case was identified in Italy.

This occurred after a 36-year-old man from Sicily sought medical attention after exhibiting symptoms after travelling to Madrid.

In addition to his initial fever, headache, exhaustion, and sore throat, he also had a number of huge spots all over his body that started to swell.

According to a study that was published in the Journal of Infection, the man’s tests revealed that in addition to the coronavirus, he also had monkeypox.

Further tests diagnosed he was also HIV positive, it added – the first case of infection by the three viruses.

The authors of the study said that as monkeypox and COVID share “the symptoms of fever, lymphadenopathy, headache, sore throat and fatigue”, it can be “difficult for physicians to perform the correct diagnosis, also considering that not all patients with monkeypox develop skin lesions and that COVID-19 may rarely present with rash and vesicles (spots)”.

They stated that although it is still too soon to say whether the co-occurrence of the viruses may lead to a worse outcome, clinicians should be aware that it is possible given the lack of a generally accepted cure in the case that they do.

According to the paper’s authors, there is still insufficient proof that the co-infection of the monkeypox virus, SARS-CoV-2, and HIV can worsen the patient’s condition because this is the first known instance of such a combination.

“Given the current SARS-CoV-2 pandemic and the daily increase of monkeypox cases, healthcare systems must be aware of this eventuality, promoting appropriate diagnostic tests in high-risk subjects, which are essential to containment as there is no widely available treatment or prophylaxis.”

The man, who had received two COVID vaccinations, travelled to Spain for five days between June 16 and June 20, 2022. Nine days later, he returned home with a temperature of 39°C along with headache, weariness, sore throat, and groin pain.

On July 2, he tested positive for COVID. Later that day, a rash appeared on his left arm and spread to his body, lower limbs, face, and bottom. These small, painful areas were encircled by red rings.

He visited the emergency room of the Policlinico “G. Rodolico – San Marco” University Hospital in Catania, Italy, three days later as the spots continued to enlarge, and was then sent to the infectious diseases section.

He informed the medical staff that he had undergone syphilis treatment in 2019 and had tested HIV-negative in 2021.

He tested positive for all three viruses after a series of tests were conducted due to his symptoms, with monkeypox being identified as coming from the West African clade and being the variant that caused the Spanish outbreak, and COVID being BA.5.1, one of the two main variants causing infections worldwide.

Almost all skin lesions developed crusts by the third day in the hospital and eventually developed into scars. He received HIV therapy before being released.

His case, according to medical professionals, emphasises the importance of thoroughly researching patients’ histories before making a diagnosis because making the wrong choice could endanger other people.

The man claimed to have engaged in unprotected sex with men while visiting Spain, according to the authors, lead by Santi Nolasco.

“This case highlights how COVID-19 symptoms and monkeypox symptoms may overlap, and it corroborates how, in cases of co-infection, [patient history] collection and sexual habits are crucial to perform the correct diagnosis,” they said.

“Our case emphasises that sexual intercourse could be the predominant way of transmission. Therefore, complete STI screening is recommended after a diagnosis of monkeypox.

“In fact, our patient tested positive for HIV-1 and, given his preserved CD4 count, we could assume that the infection was relatively recent.

“To note, the monkeypox oropharyngeal swab was still positive after 20 days, suggesting that these individuals may still be contagious for several days after clinical remission. Consequently, physicians should encourage appropriate precautions.”

The paper says since January 2022, more than 16,000 people in over 74 countries have been affected by monkeypox and the COVID subvariants BA.4 and BA.5 are currently responsible for more than a million cases per day worldwide.

Putin to increase size of Russian armed forces by 137,000