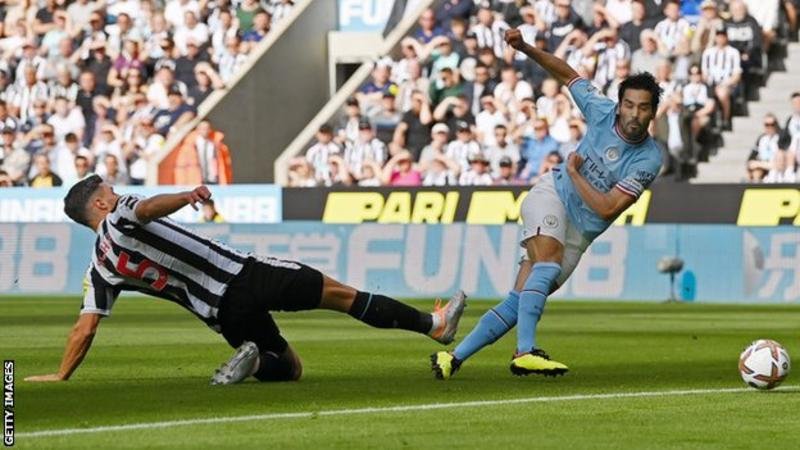 English champions Manchester City produced a brilliant fightback as they came from 3-1 down to draw at Newcastle in a pulsating match featuring six goals and an overturned red card.

Newcastle were two goals ahead after 54 minutes but Erling Haaland and Bernardo Silva scored within four minutes of each other to preserve City’s unbeaten start to their Premier League title defence.

City took a fifth-minute lead as Ilkay Gundogan was left unmarked from Silva’s pass and was able to take a touch before slotting past Nick Pope.

The England goalkeeper made a number of saves before the hosts equalised with Miguel Almiron sliding in to meet Allan Saint-Maximin’s cross, with the goal given after a video assistant review overruled an original offside decision.

The excellent Saint-Maximin ran at the City defence before finding Callum Wilson, who took a touch to create space and shot Newcastle into the lead.

The visitors had a chance to equalise but Pope pushed Haaland’s effort on to the post and Kieran Trippier, sold by City in 2012 after coming through their academy, grabbed a brilliant third with a stunning 25-yard free-kick.

Haaland pulled one back, finishing from inside the six-yard box after Rodri’s pass, before Silva equalised following Kevin de Bruyne’s superb through ball.

Newcastle thought they had gone down to 10 men with Trippier shown a red card for a knee-high trip on De Bruyne. But referee Jarred Gillett downgraded it to a yellow after watching the incident again on a pitchside monitor – and both teams finished with a point.

City began the weekend in top spot and knew a two-goal victory would take them back there, above Arsenal.

Pep Guardiola’s side made the perfect start with Gundogan scoring after only five minutes – the first goal Newcastle had conceded this season.

But City should have stretched their lead. Pope saved with his legs to deny Haaland and Phil Foden and kept out an effort from De Bruyne as the visitors piled on the pressure.

Newcastle started to get back in the game and Saint-Maximin had an effort parried by Ederson with Wilson also unable to convert a chance as he lost his balance.

But it became 1-1 in the 28th minute as Saint-Maximin crossed from the left and Almiron, who had earlier wasted an opportunity by firing over, flung himself at the ball, which bounced off his thigh and into the net.

It had originally been ruled out for offside but a VAR check showed Joao Cancelo and Kyle Walker had played him onside – to the delight of Almiron, who celebrated his first goal of the season.

Miguel Almiron’s goal was his first for Newcastle this season

It would have been a satisfying moment for him as he had been recently mocked by City’s Jack Grealish, absent at St James’ Park after picking up a knock in the 4-0 win over Bournemouth eight days ago.

During City’s title celebrations in May, the England forward joked Riyad Mahrez had played ‘like Almiron’ in their final-day victory over Aston Villa, but the Paraguayan silenced his critic in the best way possible.

Newcastle scored again just before half time when Saint-Maximin played a ball into Wilson, who produced an excellent first touch to evade both Ruben Dias and John Stones before putting his side ahead.

City, facing their first away league defeat since 15 August 2021 when they lost 1-0 at Tottenham, fell further behind with Trippier’s excellent free-kick.

Newcastle unable to hold on to two-goal lead

But with the home fans ecstatic at their side’s advantage, City showed why they have been English champions in four of the past five seasons, producing an excellent recovery.

Haaland had faced criticism after only having eight touches in the 4-0 win over Bournemouth, although he did register an assist.

But the Norway striker grabbed his third league goal since his £51.2m move from Borussia Dortmund in June with a predator’s finish from close range, reacting quickest to convert Rodri’s pullback.

Silva then calmly finished from De Bruyne’s pass to leave it at 3-3 with 26 minutes to go and set up a thrilling finale – in which Trippier feared he had been dismissed, only to be reprieved.

Neither side could find a winner as a frantic afternoon ended in a draw with both teams maintaining their unbeaten league starts, with City second on seven points, two more than sixth-placed Newcastle.