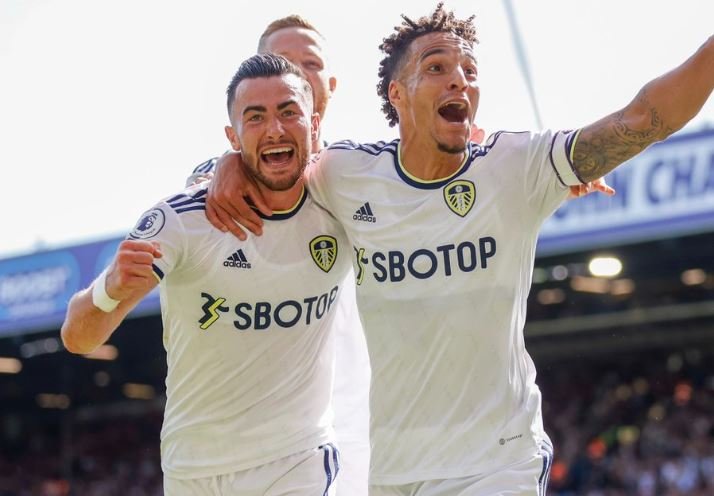 Leeds United recorded a remarkable win over Chelsea at Elland Road to go second on the Premier League table behind league leaders, Arsenal.

Aaronson scored Leeds opening goal in the 33rd minute after Eduoard Mendy failed to properly clear his lines after he was put under pressure by the Leeds forward.

Rodrigo stretched the home side lead when he nodded a free kick past Mendy before Jack Harrison completed the scoring.

Chelsea’s new signing Kalidou Koulibaly was shown a red card after he picked up a second yellow card late on.

Chelsea, who spent over £170m on players over the summer, were the architects of their own downfall in the first half. Edouard Mendy gifted Leeds the opener by miscontrolling a back pass, allowing Brendan Aaronsen to pounce.

Four minutes later Raheem Sterling gave away a free-kick on the edge of the box, from which Rodrigo scored his fourth of the season after Jack Harrison’s delivery.

But Leeds also out-fought their opponents, particularly in midfield, in echoes of the famous historical battles between the two rivals.

And they sealed a first Premier League win over Chelsea in seven attempts, dating back to 2000, when Harrison scored after Daniel James’ cross was touched to him by Rodrigo.

An already raucous Elland Road was in disbelief at that moment; the home fans taunted their Chelsea counterparts and manager Jesse Marsch punched the air in wild joy.

There were chances for Chelsea. Sterling curled wide in the first minute and had a goal disallowed, while Marc Cucurella, signed for £62m, was also off-target twice.

But when Kalidou Koulibaly was sent off six minutes from time for a second booking, it summed up Chelsea’s afternoon, allowing Leeds fans to wallow in the elation of a superb start to the season as their team moved into third in the table.

A stunning victory  to win over Marsch sceptics

Having secured their Premier League survival on the final day of last season and lost both Kalvin Phillips and Raphinha to Manchester City and Barcelona over the summer, Leeds’ story was expected to be one of how they would cope.

But with boss Marsch making several key signings, there was a spirit and team ethic in Leeds which Chelsea could not match. They were helped too by a crowd which was already deafening before kick-off and only increased in volume as the visitors fell apart.

After a positive start, which saw Tyler Adams get the upper hand in midfield on Conor Gallagher, who was making his full Chelsea debut, the atmosphere took off in the 33rd minute following Mendy’s error.

Aaronson, who was signed from RB Salzburg in the summer, had already shown his endeavour in midfield and the American chased down Thiago Silva’s backpass to open his Leeds account in the easiest fashion possible once keeper Mendy lost the ball a yard from the goal.

Four minutes later Elland Road was in disbelief and Marsch was charging down the touchline. Harrison’s set-piece caused problems once again and Rodrigo doubled United’s lead to become the Premier League’s top scorer with four goals this season.

The second half was mostly about containment as Chelsea searched for an equaliser. But Leeds’ defence was equal to the task, with a third goal allowing fans to enjoy a brilliant day in the Yorkshire sunshine.

There are bound to be difficult days to come over the season, but this will give Marsch sceptics plenty to consider – and the American lapped up the applause from all four sides of the stadium with fans singing his name.

Chelsea might have been disappointed to have left their latest battle with Tottenham with only a point last Sunday but many fans were encouraged by the performance.

This was a complete contrast because they contributed to their own demise, were outmuscled in midfield and failed to find cohesion up front despite their vast array of attacking talent.

Manager Tuchel, who is already facing a touchline ban after the Spurs match, could not contain his frustration with both his team and Marsch at times on the touchline.

The first-half display was summed up by £50m signing Sterling. He was bought to be a leader, but he missed a great chance in the first minute and his demeanour seemed to be affected by a disallowed goal in similar circumstances after 15 minutes.

And after he was booked for a silly foul, which led to Rodrigo’s goal, he did not really feature.

But in truth there were problems all over the pitch, and there will be concerns from the new owners and Tuchel about a performance which might need addressing with further signings.

Mendy, who has been a solid performer since he signed for Chelsea, made an uncharacteristic error for the opener, but the wider concern will be about Chelsea’s midfield.

Gallagher struggled alongside Jorginho and it further exposed an area of the field in which the Blues were missing injured duo N’Golo Kante and Mateo Kovacic.

Both midfield starters were replaced after an hour, with Ruben Loftus-Cheek moving inside and Hakim Ziyech and Christian Pulisic being introduced.

But other than Reece James having a shot saved by Illan Meslier, Chelsea failed to carve out many clear-cut openings as their attack faltered.

It left Tuchel cursing in the dugout and Koulibaly completed a miserable afternoon when he was shown a second yellow card for pulling back Joe Gelhardt.

Related Topics:ChelseaLeeds United
Up Next