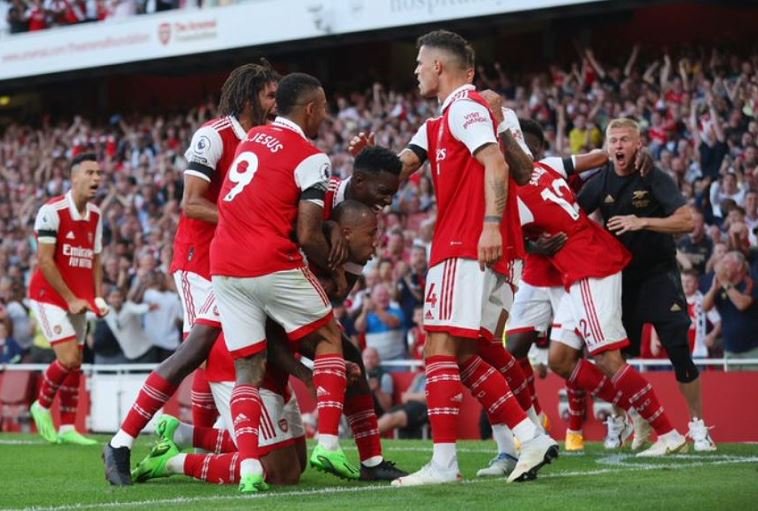 Gabriel made up for a horrible error to score the winner against Fulham and maintain leaders Arsenal’s winning start to the Premier League season.

The defender lost possession on the edge of his own box to allow Aleksandar Mitrovic to put Fulham ahead.

But after Martin Odegaard equalised with a deflected strike, Gabriel redeemed himself with a scrambled finish from close range in the 85th minute.

Goalkeeper Aaron Ramsdale then made a crucial save to deny Fulham’s Nathaniel Chalobah an equaliser in added time.

Victory ensured Arsenal kept up their 100% start to the season and stayed top of the table, despite being frustrated for large parts by the visitors.

Mikel Arteta’s side controlled possession and had numerous chances, with Odegaard, Bukayo Saka, Gabriel Martinelli and Gabriel Jesus all coming close before Mitrovic stunned the Gunners with the opener.

Substitute Eddie Nketiah added much-needed energy for Arsenal when he was introduced shortly after Arteta’s side fell behind and after the impressive Odegaard’s equaliser, Gabriel thumped the ball home after a scramble following a corner.

The result ends Fulham’s impressive unbeaten start to their return to the top flight while Arsenal strengthen their credentials as a growing force under Arteta.

The cost of Gabriel’s mistake could have been a heavy one, with Arsenal appearing poised to fall behind Manchester City on goal difference in the table if they had dropped two points against the Cottagers.

They needed some fortune to get over the line as well as a smart stop from Ramsdale in added time to push Chalobah’s effort away from goal.

Odegaard was rewarded for his endeavour and creativity as his curling effort took a wicked deflection nine minutes after Gabriel’s mistake – and that gave Arsenal the impetus to drive forward in search of the three points.

However, as chances continued to fall away from Arsenal players, there was a growing feeling they would drop points for the first time this season.

Gabriel, who pulled his shirt over his head seconds after the Serbia striker slotted the opener, was the most determined as the ball dropped in front of goal and he forced the ball home.

It was the perfect way to mark Arteta’s 100th Premier League game in charge and Arsenal will seek to end August with five wins out of five when they host inconsistent Aston Villa on the final day of the month.

For Fulham, it was a disappointing result but another encouraging performance, follow their opening-weekend draw with Liverpool, and Marco Silva’s side look at home in this company.