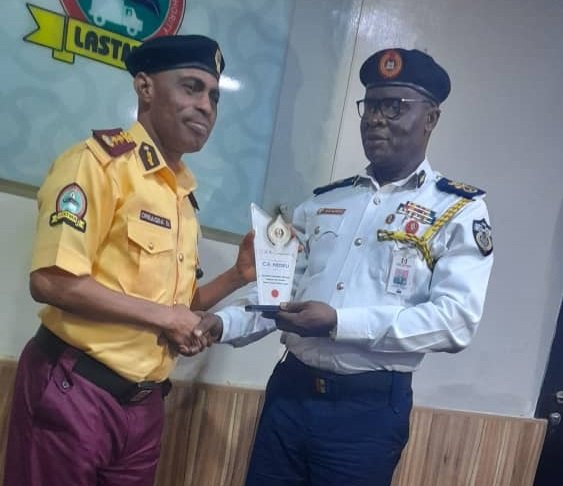 Especially, in order to fulfil the first letter ‘T’ which is ‘Traffic Management and Transportation’, of the THEMES agenda of the Lagos State Governor, Babajide Sanwo-Olu.

He made this assertion during the courtesy visit by the Federal Fire Service Zonal Commander and his team to the management of LASTMA at the headquarters’ in Oshodi on Wednesday, 17 August, 2022.
Oreagba further said that the visit is first of its kind between government LASTMA and Federal Fire Service.. “This attests to the fact that the two agencies possess a common denominator of rendering safety services to the public”. He also noted that “the relationship between the agencies is interwoven and cordial, especially as first responders to incidences/ emergencies on the road”.

The LASTMA General Manager averred that “we have always enjoyed prompt response from the Lagos command of the Federal Fire Service personnel whenever called upon”, he then named the Lagos Island, Funso Williams Avenue  among the Federal Fire Stations that promptly respond when called upon during road incidences.

In his statement earlier, the Zonal Commander, Federal Fire Service, Zone F Command said that fighting fire is the least duty of a fire fighter. He noted that the prevention of fire is the major duty, so as to, prevent loss of lives and property, “and this starts from when a building or road is to be constructed, the input of the fire service is of utmost importance in determining the adequacy of exits in case of fire among others”.

Njoku also stated that the Fire Service trains people on fire prevention, actions to be taken in case of fire, how to fight fire at the onset etc. he further noted that timely and adequate information is required from members of the public to efficiently and effectively combat fire outbreak.

He however, gave kudos to LASTMA for reducing the travel time on Lagos roads, especially in comparison to his earlier years as a Federal Fire Officer in Lagos before his posting out and to now, on his return as the Zonal Commander.

Present at the meeting were the management of both LASTMA and the Federal Fire Service in Lagos.

Emirates to suspend all Nigerian flights over $85m