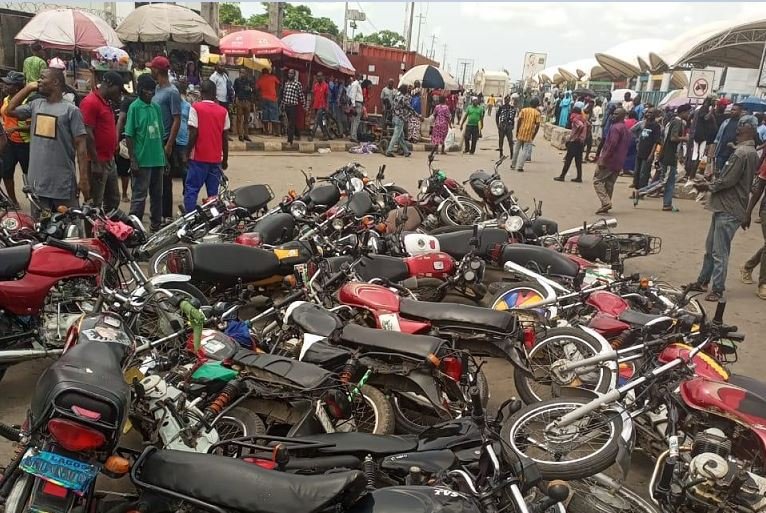 The Lagos State Taskforce have carried out numerous raids and operations in areas like Oko-Oba, Local Airport Road and Abeokuta Expressway where it had been reported that some commercial motorcycle operators popularly known as okada have been operating despite the ban on their activities in some parts of the Metropolis.

Speaking on the recent activities of the agency, the chairman, CSP Shola Jejeloye highlighted that the enforcement of the ban on the activities of okada operations in the restricted areas would be a continuous one due to the fact that there are still some of them who are foolhardy and bent on riding their bikes with no regard for the laid down traffic rules of the State.

Meanwhile the Agency also raided Jakande and Iyana Ejigbo axis where not less than 120 okada were impounded. During the course of of carrying out their lawful duties today, officers of the Agency were provoked by a knife wielding butcher who injured one of the officers. “these are some of the professional hazards we face daily on the job” Jejeloye stated.

“The level of compliance of the ban on okada activities is very impressive but we still have some rebellious operators who ply in the evenings or sometimes weekends, thinking we are going to be relaxed at those times. We have corrected that thought by impounding the bikes and arresting both riders and passengers who will be made to face the court immediately”.

The Taskforce chairman urged his men and officers to gear up for more activities following the recent announcement by the State Government on the inclusion of three local government area and five local council development Areas to list of banned locations of okada operations. He maintained that though the Taskforce had never rested on its oars to ensure that sanity is restored on Lagos Roads, more efforts would be put in collaboration with other Police Divisions and security agencies to stamp out okada operations in those areas come September.

In a related development, the Lagos State Taskforce has raided some abandoned buildings at Cameron Road in Lagos where reports had been received about the activities of some suspected criminal minds who make use the abandoned building as a safe haven.

CSP Jejeloye who led a team of operatives in a four hour raid disclosed that the activities of criminal elements in the State would not be condoned in any form.

“Intelligence reports have it that criminal elements in this area make use of these abandoned buildings as a take off point and resting place before and after their activities that is why we have carried out this intense raids to put a stop to it. We have arrested some suspects who will be interrogated and then brought before the Magistrate in court.”

The Taskforce chairman appealed to all well meaning Lagosian to report any suspicious or unusual activity to the Agency or to the nearest Police Station as security of the State is a collective effort which requires all hands on deck to achieve optimum safety and comfort.