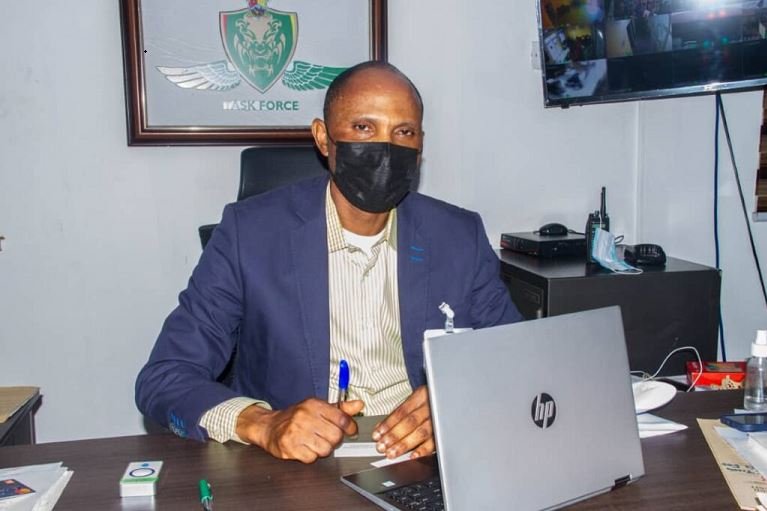 Lagos State Taskforce have cleared up the encroachment on the right of way on the service lane of the Ladipo spare parts market, frontage of Guardian Newspaper Publications Company and the end of Oshodi-Apapa Expressway where traders had illegally occupied, displaying their goods, carrying out illegal mechanical activities for a while.

The operation which took place over the weekend lasted for over 5 hours and was led by the chairman of the agency, CSP Shola Jejeloye who blamed traffic congestion along that route on the activities of traders who had refused to adhere to laid down environmental laws of the State concerning displaying of goods haphazardly and obstructing the free flow of traffic.

He described the activities of traders operating on the service lane as selfish and inconsiderate as a result of the fact that their actions of a few traders there has a ripple effect on Lagosians who ply that route and spend more than the necessary amount of time in traffic.

Speaking further on the incident, CSP Jejeloye disclosed that The Lagos State Taskforce had been to that Road a year ago to clear up the obstruction and also issued a warning to the illegal occupants but it fell on deaf ears.

“We have been here in the past to carry out this same operation but unfortunately the illegal occupants have returned to the same spot to trade and inconvenience Lagosians. Their activities deface the outlook of the road which is a major corridor that leads in and out of the International Airport of the Country. We will ensure that they are pushed back into the designated market complex and anyone found wanting would be arrested”

Jejeloye further stated that the operation would achieve the aim of preventing environmental degradation as a result of their illegal mechanical activities and also ease of mobility for motorists plying that route. He appealed to the Market Union to sensitize their members on the need to obey environmental laws of the State and restrict their activities to the sites allotted by the State Government.

In a related development, the Lagos State Taskforce raided shanties and hideouts where recalcitrant okada operators take off from and operate on restricted routes along Lekki, Bariga, Gbagada and Oshodi-Apapa axis of the State.

The sting operation which also took place over the weekend was targeted at okada operators have still been conveying passengers along major highways and restricted routes of the State despite the ban still being in full force. Over 120 bikes were confiscated during the course of the activity while 5 okada operators were arrested and will be charged to court.

CSP Jejeloye revealed to Lagosians that the ban on okada operations which had just been extended to some other parts of the State would require the collective efforts of both security agents and residents in ensuring that the menace of okada on our roads is completely stamped out for good. He enjoined them to report any activities of them to the nearest Police Station and to resist the urge to mount commercial bikes and avoid being arrested and prosecuted.