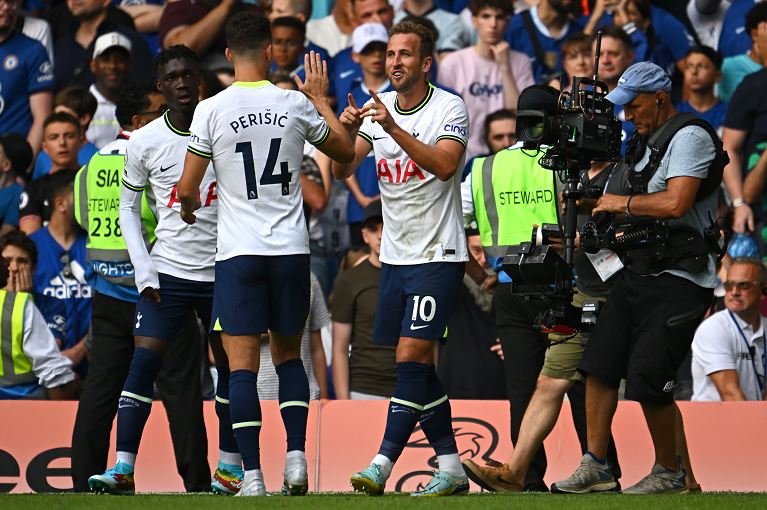 Harry Kane’s equaliser six minutes into stoppage time earned Tottenham a dramatic draw as a fiery London derby at Stamford Bridge ended in an angry confrontation between Thomas Tuchel and Antonio Conte that resulted in red cards for both managers.

Tempers were running high throughout as Chelsea twice led before Kane’s glancing header seconds from the end gave Spurs a point.

Chelsea were furious that referee Anthony Taylor had failed to penalise Rodrigo Bentancur for a challenge on Kai Havertz, the ensuing melee leading to face-to-face fury between the two managers which ended with both Chelsea boss Tuchel and Spurs counterpart Conte receiving yellow cards.

TUCHEL VS CONTE: ROUND TWO!!! 🤬🤬 pic.twitter.com/XhWuOU4fwD

Once order had been restored, Chelsea were back in front as James scored from Raheem Sterling’s pass, the fired up Tuchel celebrating by sprinting past Conte along the touch in sheer elation.

Chelsea thought they had made it six points from two games until Kane headed in Ivan Perisic’s corner – the antipathy not ending there as a handshake between Tuchel and Conte developed into another bust-up between the pair which ended with them both getting their marching orders.

Chelsea will feel this was an opportunity lost as they were the better side for long periods only to lose the lead twice, once in contentious circumstances, and then with the pain of it being virtually the last action of the game.

Tuchel, once his very obvious anger subsides, will be satisfied with large parts of Chelsea’s performance, which really ought to have brought a win.

Chelsea pressed with greater efficiency than they did when Romelu Lukaku was leading the line and were a more composed and compact side than Spurs, who struggled to find any rhythm but still had enough to get a point.

Tuchel will question why Anthony Taylor did not award a foul when Bentancur dived in on Havertz, and Chelsea also felt Cucurella was fouled before Perisic’s corner that was turned home by Kane.

The scenes between the two managers were part of the drama and showed how high feelings were running, but both Tuchel and Conte can expect to hear from the authorities.

Chelsea’s summer signings made their contributions as Koulibaly and Cucurella combined for one goal and Sterling set up James but there was no doubt who was the more satisfied manager at the final whistle.

Spurs dig deep for a point

Conte’s animation throughout, and especially after the final whistle, showed how much this result meant to him on his return to the club where he won the title.

He raced towards opposite number Tuchel when Hojbjerg equalised and the pair were involved again when Chelsea’s manager seemed reluctant to let go of Conte’s hand after the final whistle.

In the end, Spurs will be happy with a draw because they were disappointing for long spells, although predictably it was Kane who came to their rescue in those dying moments.

Spurs are accompanied by big expectations under Conte this season but will have to show character and resilience at times when they fail to hit their best.

This was one of those occasions and the way they celebrated with their fans after the melee at the final whistle had broken up was a sign of their satisfaction.