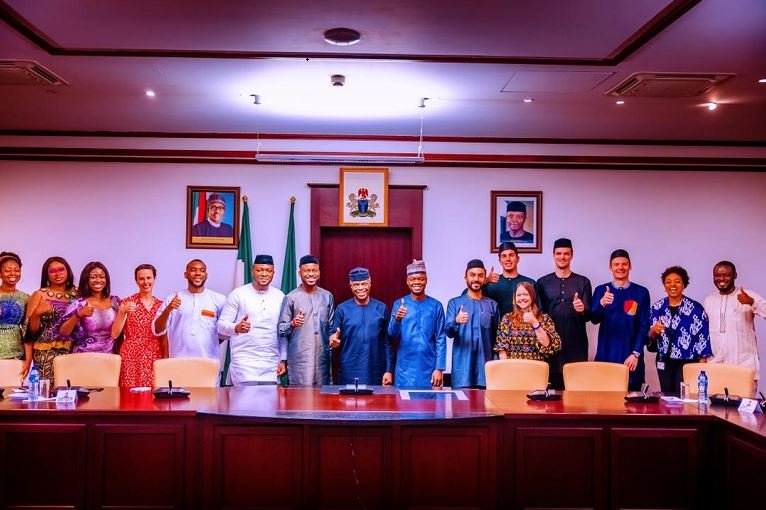 Vice President Yemi Osinbajo says a situation where societal or governmental institutions are not strong enough to compel individual behaviour in a way that advances the common good, spirituality and commitment to such values as social justice and transparency are important.

“Spirituality helps in that sense to help you to decide what to do and what not to do. Especially where institutions are not strong enough to restrain people from behaving in a particular way or not.”

This was one of the highlights of the interaction between the Vice President and a group of Harvard Business School students who visited him on Friday at the Presidential Villa, Abuja.

Numbering about a dozen, the students who are currently on an African excursion asked questions about leadership, faith, spirituality, government policies in education, health, economy, and national image, among others.

In his responses, the VP articulated his personal commitment to the virtues of integrity, transparency and social justice which are also virtues exhorted in the different faiths and religions in the country.

He said, “for me, spirituality connotes values. I came into government with values about what I think is important especially around transparency, social justice and justice, among others. You are almost always a product of the values you believe in. Fortunately, a lot of these values cut across the different faiths, they are not necessarily restricted to a religion or one faith.

“In societies that are more developed institutionally, you don’t need to be told that you shouldn’t do certain things because you could end up in jail if you do and there is a good likelihood that you could be detected and the process will go through and you will be punished.

“I speak about corruption and all that. But where the institutions are weak, some people have reasons for not doing the right thing,” Prof. Osinbajo submitted.

According to Osinbajo, “first, there is a need to appreciate the size of the country, which is crucial to understanding what the issues are.

“For instance, Borno State is about the size of the whole of the United Kingdom plus Sweden or Denmark. So, when it is reported that there is violence in Nigeria, it is probably an incident in one remote area of the country, and many people in Abuja and Lagos may hear about it on social media, such is the size of this country.

“When they talk about economy, we are often compared with smaller African countries, but there are 10 states in Nigeria that have bigger GDPs than those countries, it is a huge target market,” Osinbajo said.

“This is why some of the work around the Ease of Doing Business etc. are all initiatives that have behind them, the whole idea that this environment is one that is welcoming to business and people can come and do business.”

He also spoke about education, educating people and wealth creation, providing resources so that more people can move up.

“A lot of that is tied to education, that is really something that interests me the most. Just using an example of something we did in the Northeast.”

Osinbajo then went on to narrate how the Learning Centers in Maiduguri were started.

“I visited Maiduguri, Borno State in 2015, and I saw many children whose parents had been killed by the Boko Haram insurgents and in a place where they were, I saw about 49,500 of such children. I had a conversation with the governor and other officials and the idea of starting a school for them came up and we stepped in.

“The State Government gave us land in Maiduguri that could accommodate 1,300 children, and these were children that could only speak Kanuri. We built a school that exposed these children to technology and values, and after five years, the children were able to speak English and Hausa, they were doing robotics, writing programmes and other things they were not able to do before then.

“What this showed is that with skills, any child, anywhere can do everything, especially when you provide that child with education that is focused,” the VP added.

The Vice President also spoke about the economy, and the Federal Government’s Social Investment Programme, politics, leadership, education, and energy transition, among others.

The students, while thanking the VP for the opportunity to visit him added according to their leader, Mr. Daniel Jaiyeoba, that they wanted to hear from the Vice President noting that “we understand your private sector experience and now you are in the public sector. That is why we put this visit together.”

The students were accompanied on the visit by the Special Adviser to the President on Ease of Doing Business, Dr Jumoke Oduwole, who had taught some of them as undergraduates. The list of the Harvard students’ delegation also included Maan Aldaiel, Dusty Register, Tomas Tussie, Connor Popik, Ruben Anzures, Scott Kimberlee, Thomas Cowan, Laura Romine, Lanre Ojutalayo, Oluwatoyin Ogundele, Etim Imoh and Abdul-Rahman Buhari.

JUST IN: ASUU to continue six-month strike after NEC meeting