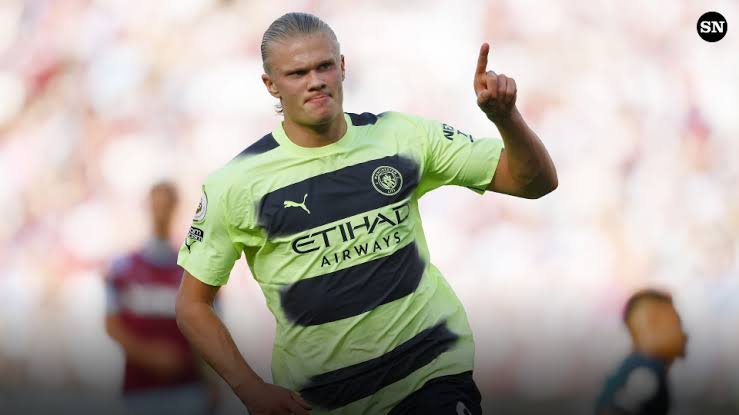 Erling Haaland opened his Manchester City goal account and demonstrated the huge threat he will pose this season as the champions began the defence of their Premier League crown in impressive fashion at West Ham United.

Brilliant 22-year-old Norwegian striker, Haaland scored twice as Manchester City began their Premier League title defence in a confident fashion by brushing aside West Ham 2-0 in front of a record crowd at the London Stadium.

A crowd of 62,443 packed into the Hammers’ home ground – the biggest of any London-based club – only to be met by the towering presence of Haaland and the wizardry of Ilkay Gundogan.

After a sluggish start in which the hosts were forced to switch goalkeepers due to an unfortunate injury to Lukasz Fabianski, City captain Gundogan took the lead with a sharp pass that found the deft run of former Borussia Dortmund striker Haaland, who was then upended by substitute ‘keeper Alphonse Areola.

The Norway international predictably found the back of the net from 12 yards with a coolly-struck spot-kick to open the scoring (26), before latching onto Kevin De Bruyne’s defence-splitting ball and slotting home his second of the afternoon (65).

Haaland is the second debutant in Premier League history to win a penalty and then successfully convert it, and the second striker to register twice on their City debut, matching Sergio Aguero’s feat from August 2011.