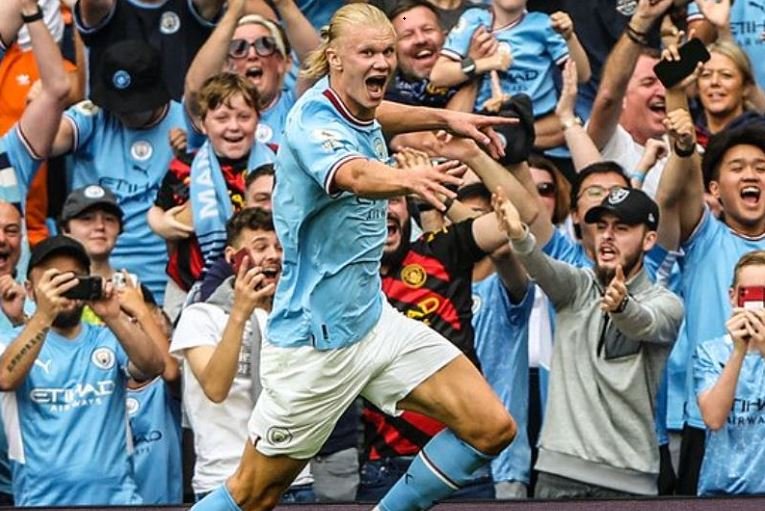 Erling Haaland scored a second-half hat-trick as champions Manchester City fought back from two goals down to claim a thrilling Premier League victory over Crystal Palace.

The visitors looked on course to win at Etihad Stadium for the second consecutive season when they led 2-0 at the break courtesy of a John Stones own goal and Joachim Andersen’s powerful header.

However, City’s first effort on target saw them reduce the arrears shortly after the break when Bernardo Silva’s shot deflected off Palace midfielder Jeffrey Schlupp past Vicente Guaita.

And with the hosts in complete command Haaland took centre stage.

The Norwegian nodded in Phil Foden’s cross to draw Pep Guardiola’s side level, then prodded in Stones’ wayward shot to complete the turnaround.

With Palace chasing the game, Haaland rounded off the scoring, racing on to Ilkay Gundogan’s pass and holding off Joel Ward to cap a fine performance, before being replaced to a rapturous ovation from the home fans.

The win moves City top of the table before Arsenal’s late kick-off against Fulham, level on 10 points with Brighton & Hove Albion, while Palace are 13th with four points from four games.

A tale of two halves

While City’s supporters celebrated at full-time, Patrick Vieira and his Palace players were left to reflect on what might have been after a gutsy first-half display brimming with organisation, stout defending and some excellent counter-attacking.

Eberechi Eze caught the eye for the visitors and produced two wonderful deliveries from which they capitalised on slack City defending.

His fourth-minute cross from the right flew through a posse of players before cannoning off the unfortunate Stones, while his corner from the same side saw Andersen have an unopposed header above Haaland which he powered home.

While far from immediate, City went more direct and produced the sort of stirring response that saw them come from a similar position to claim a point at Newcastle.

Silva’s effort proved the catalyst for their recovery. The Portugal midfielder was excellent throughout and while there was an element of good fortune about his goal there was a sense of inevitability about it.

Wave after wave of attacks followed and Haaland, who had been well shackled up until then by Marc Guehi and Andersen, came to the fore.

Six of his seven efforts on goal came after the break, with his return of three goals a rich reward for a player showing little sign of needing to adapt to the demands of a new manager or country and quickly establishing himself as one of the top-flight’s most feared forwards.

Only Diego Costa, with seven goals, has enjoyed a better goalscoring return in his first four Premier League games than the former Borussia Dortmund striker.

Should he maintain his efficiency in front of goal, Haaland’s ability to swing tight contests in City’s favour is likely to prove an invaluable commodity in the title race.