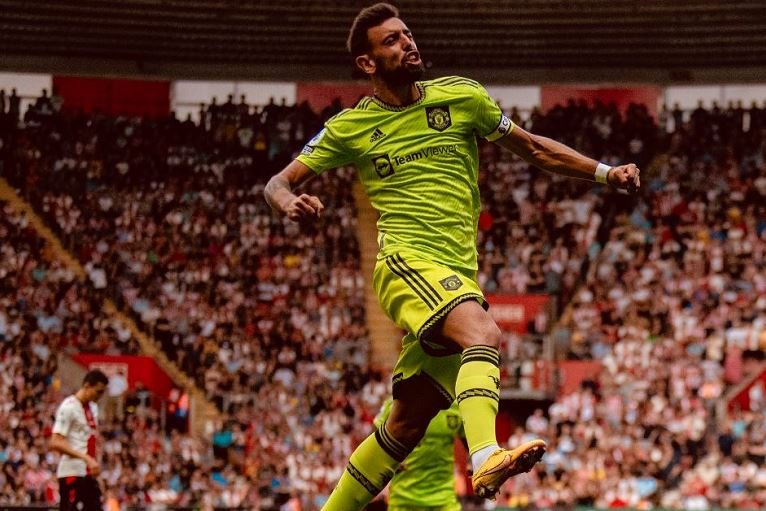 Manchester United ended a dismal sequence of seven straight Premier League away defeats as they secured a narrow win at Southampton.

United manager Erik ten Hag wanted his side to build on the thrilling victory over Liverpool at Old Trafford on Monday night and they were able to do so in the face of a spirited Southampton challenge.

Bruno Fernandes broke the deadlock 10 minutes after the break with a precise side-footed volley to give United the three points they just about deserved.

The Saints, who will take heart from their performance, survived an almighty goalmouth scramble in the first half when keeper Gavin Bazunu saved from Anthony Elanga and Armel Bella-Kotchap blocked Christian Eriksen’s follow-up.

United broke through when Fernandes met Diogo Dalot’s cross and as they closed out their second successive win and first league triumph on the road since February, Ten Hag was able to introduce Casemiro, the new £60m acquisition from Real Madrid, as a late substitute.

United grind out victory at Southampton

United could not afford to slip up at Southampton after the manner in which they overcame Liverpool or they would face charges that they had simply raised their game against their greatest rivals.

And while it was hardly a vintage performance, this was still a vital win – and Ten Hag will take great satisfaction from a clean sheet and three points.

Fernandes’ moment of quality settled a tight and competitive game in which United had to survive late pressure from the hosts with new defender Lisandro Martinez prominent and keeper David de Gea making a fine save from Joe Aribo’s header.

The visiting fans demonstrated their delight at the final whistle – while once more noisily chanting their desire for the removal of owners the Glazers – and were also able to get a glimpse of new marquee signing Casemiro when he appeared as a late substitute to shore things up.

Not a classic, but United and Ten Hag will happily take this as they embark on the slow rebuild from the crisis that threatened to envelop the club after defeat at home to Brighton and that 4-0 debacle at Brentford.

Saints must take solace despite defeat

Southampton will be disappointed, but the warm applause from their fans at the final whistle was a reflection of their performance.

They lacked the cutting edge Fernandes provided for the visitors but there was still plenty to admire and certainly no sign of the lack of character or fractured team spirit of which manager Ralph Hasenhuttl and his players were accused after a poor start to the season.

Southampton were competitive, committed and battled to the final whistle in a bid to rescue a point.

Hasenhuttl will feel he has something to work with here and if the response of their fans at the conclusion is anything to go by, so do Southampton’s supporters.