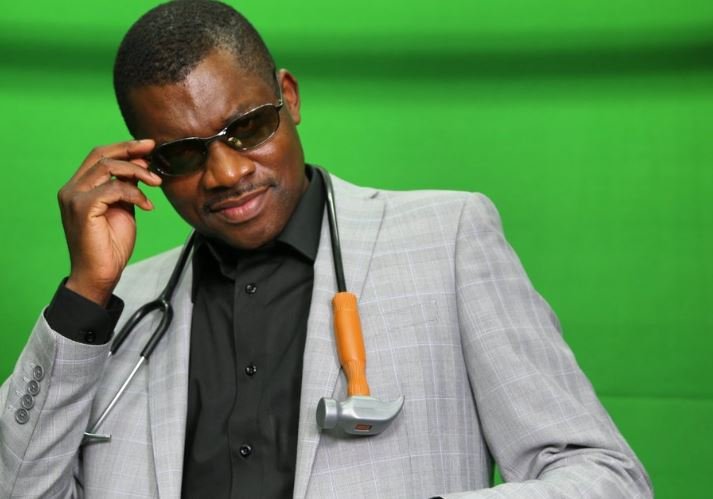 Some of the clear signs of a mentally unstable person are confused thinking, flickering mental focus, and imbalance reasoning. These sum up the characteristics of Rudolf Okonkwo who calls himself “Dr. Damages”.

We know that he is obsessed with the Vice President, Prof. Yemi Osinbajo but the extent of his poetic recklessness is only a reflection of a personal midlife crisis-for there can’t be any other reasonable cause for this petulance.

Damage’s obsession with the Vice President is becoming an issue of grave concern to everyone including those who are fans of his satire.

In his recent piece of dross he titled “The Secret Diary Of Vice President Yemi Osinbajo,” Damages deliberately chose to misinform and confuse his audience. He wrote a jumble of different imaginary thoughts while attributing it to the Vice president.

For instance he wrote: “To have that decision to fire Lawal Daura questioned, to have it considered for possible reversal, to have some people who think they own the country use it as a basis to question my loyalty to the president, to have them instigate my isolation and emasculation, was all that I needed to pen my resignation.”

This is absurd and mischievous to say because the sack of Lawal Daura is one of the best decisions undertaken by the Vice President, who was acting president then.

Nigerians, including opposition politicians, lauded the VP for his quick decision and swift action of firing the DSS boss—without recourse to familiarity or political friendship—for invading the National Assembly. The VP’s passion for Rule of law and democracy was the reason for his decision. The Vice president believes in rule of law and due process.

There was absolutely no fracas between the Vice President and his principal after the sack. The garbage written by Damages was another dry thought borne out of unreasonable imagination as a result of too much marijuana intake.

Rudolph has again displayed clear signs that he is a damaged personality with a defective brain and distorted reasoning. He has, on many occasions attempted to ridicule Vice President Yemi Osinbajo through his senseless writings, dry parodies and uninteresting satires.

They are strewn with wild figments of his rascally imaginations and concocted pieces of garbage that are designed to disparage the erudite VP.

Most of them appear in the form of video satires which are often dry and lack fiber of humour or are even reasonable enough for any normal human to digest the message behind it.

He boasts of having a footprint in political satire, which he started during the Jonathan administration, precisely nine years ago. But in contrast, he has reduced himself to a tool being used by some underground players to attack personalities like Vice President Osinbajo as his own effort at clout chasing.

A writer and journalist he claims to be, yet he has succeeded in ridiculing this art through his unprofessional conduct and unintelligent act. Even a kindergarten will string together something more coherent and more reasonable, that will be appealing to the public space than his infantile displays. He has succeeded in reducing himself to public scorn.

He has been grappling to survive after being broke for a while, and he thinks he can survive by attacking the Vice President incessantly to get his attention. He claims to be a Post-Colonial African History teacher in New York, yet his daily routine is fixated on VP Osinbajo. Well, the Vice President is very busy with official duties and at the same time recuperating from his recent surgery. The least he needs at the moment is a distraction.

Also, in November 2021, damages wrote a parody letter titled “How To Avoid Being Sued By Osinbajo.” He parodied a letter by the VP’s lawyer in which the lawyer had addressed the public against broadcasting certain defamatory posts which were obviously maligning the VP.

These and many others are clear proof that Damages is trying by every means possible to get the attention of the Vice President. His futile attempt to paint a bad picture of the VP in public space is affecting his brain in a way that he suddenly has an uncontrollable orgasm whenever he thinks of the Vice president’s name.

It has become obvious that Damages has a mental disconnect and cognitive dissonance from reality and the current wave of things in the political environment in Nigeria because a lot of Nigerians know that the Prof. Osinbajo has crossed his constitutional boundary as a Vice President to deliver the best he can despite the limit his office can do. The future will be kind to him.

Damages can continue with his dry parodies and empty satires. There will be no more response from me, and neither does he deserve any response or reaction from anywhere except to excoriate his arrant nonsense!