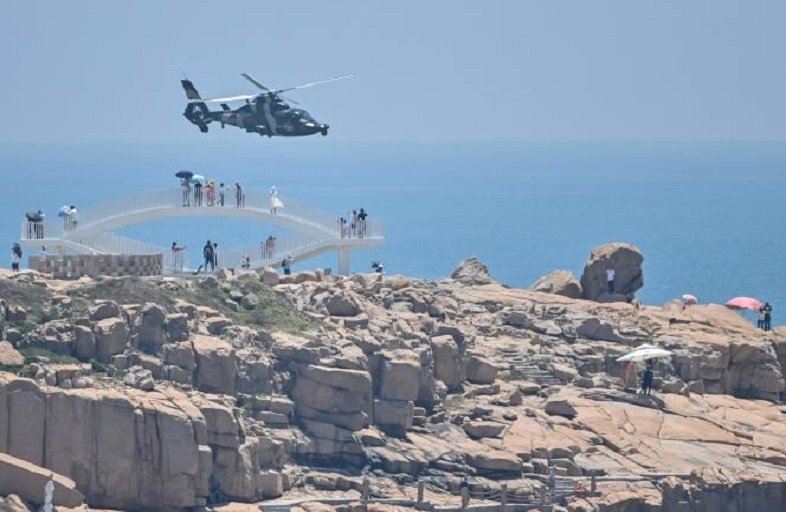 With another US congressional delegation visiting the autonomous island, China is ratcheting up the pressure on Taiwan.

A day after a US congressional delegation arrived in Taipei, China’s military claimed to have undertaken combat alert patrols and military exercises in the oceans and airspace surrounding Taiwan on Monday, according to CNN.

Less than two weeks after US House Speaker Nancy Pelosi’s visit to the self-governing island infuriated China and sparked extensive military drills in the Taiwan Strait, a new group of US lawmakers is in Taiwan.

30 Chinese People’s Liberation Army (PLA) jets and five boats were reportedly spotted near the Taiwan Strait on Monday, according to Taiwan’s Ministry of National Defense, as reported by CNN.

Sen. Ed Markey served as the head of the US congressional delegation, which landed in Taipei on Sunday for a two-day surprise visit that followed US House Speaker Nancy Pelosi’s travel to Taiwan earlier this month.

China’s military declared last Wednesday that the exercises had been “effectively accomplished,” but it also promised to “frequently undertake” more patrols in the vicinity of the Taiwan Strait.

Taiwan has never been under the sovereignty of China, but the country’s ruling Chinese Communist Party nevertheless regards it as a part of its territory and has long promised to “reunite” the island with the Chinese mainland, using force if necessary.

A representative for the senator stated in a statement that Markey’s team of five people went to the independent island to “reaffirm the United States’ support for Taiwan” and to “promote stability and peace across the Taiwan Strait.”

Taiwan’s President Tsai Ing-wen congratulated the group at their meeting on Monday for coming to Taiwan at a “critical moment” and for showing their support for Taiwan via action.

Tsai said that China’s recent military exercises around the island have “severely damaged” regional peace and stability and that Russia’s invasion of Ukraine has exposed the threat that authoritarian governments pose to the global order.

“Taiwan not only worked closely with our international friends, keeping close tabs on all military movements around us, but also kept conveying to the world our resolve to maintain the status quo in the Taiwan strait,” the president said.

Tsai added that Taiwan wishes to “further deepen our cooperation with the US and jointly maintain prosperity and stability in the Indo Pacific region. In the face of global authoritarian expansionism, Taiwan also wishes to deepen trade relations with like-minded democracies, and create a more resilient supply chain.”

Yet another war? China threatens to attack Taiwan

According to a statement from the president’s office, Markey responded by praising Tsai for her leadership and declaring that he is “proud” to “stand next to Tsai and stand with Taiwan.”

“In such uncertain times, we have to exert more efforts to ensure Taiwan’s peace and stability. We have a moral obligation to actively prevent any unnecessary conflicts. In responding to this greatest challenge, Taiwan showed unbelievable restraint and discretion,” Markey said.