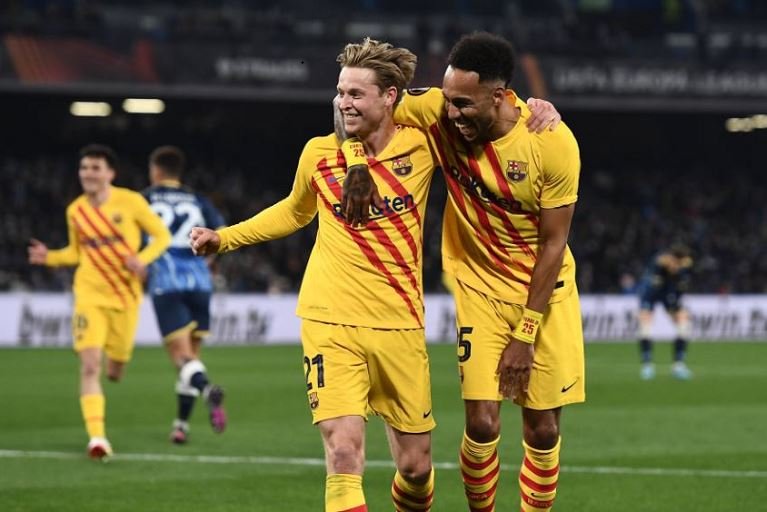 Chelsea are close to agreeing a deal worth more than 80m euros (£67.6m) with Barcelona for De Jong.(Sport – in Spanish)

The Blues are waiting on a decision from De Jong, who would prefer to move to Stamford Bridge rather than join Manchester United, while also continuing to pursue a deal for Leicester City’s French defender Wesley Fofana, 21. (Times – subscription required)

Manchester United have not given up on signing De Jong and are confident he will move to Old Trafford once they resolve the issue of the players’ deferred wages with Barcelona.(90min)

Barcelona’s Spain defender Gerard Pique, 35, has offered to play for free in order to help the club meet La Liga’s financial fair play rules and register their new signings. (AS – in Spanish)

Denmark defender Andreas Christensen, 26, and Ivory Coast midfielder Franck Kessie, 25, who both joined Barcelona this summer, could leave the club for free if they cannot be registered before Saturday’s first La Liga match. (ESPN)

Liverpool are preparing to reward England Under-21 midfielder Harvey Elliot with a new long-term contract – just 12 months after the 19-year-old signed his previous deal. (Mail)

Juventus are close to reaching an agreement with Barcelona over the transfer of Dutch forward Memphis Depay, 28. (Sport – in Spanish)

Manchester City are proceeding with an £11m deal for Anderlecht’s 21-year-old Spanish defender Sergio Gomez, which is expected to be finalised on Thursday. (Mail)

City will still look to sign another left-back before the transfer window closes, regardless of whether Gomez joins the club. (Manchester Evening News)

Paris St-Germain are close to reaching a deal worth 25m euros (£21m) with Rennes for 20-year-old French forward Arnaud Kalimuendo, who is also a target for Leeds United. (L’Equipe – in French)

Manchester United have agreed a fee for Adrien Rabiot from Juventus

United target Cody Gakpo says he is more likely to remain at PSV Eindhoven should the club qualify for the Champions League. The 23-year-old Dutch midfielder and his side face Rangers over two legs for a place in this season’s competition later this month. (Manchester Evening News)

Former Manchester United striker Javier Hernandez, 34, says he would return to the club for free to help ease their forward shortage. The Mexican currently plays for LA Galaxy. (Sun)

Former Manchester United and Chelsea midfielder Juan Mata, 34, has rejected offers to join MLS teams as the Spanish free agent continues to search for a new club. (Marca, via Sun)

AC Milan have reportedly opened talks with Arsenal’s 22-year-old Belgian Sambi Lokonga as they continue their search for a midfielder. (Football Italia)