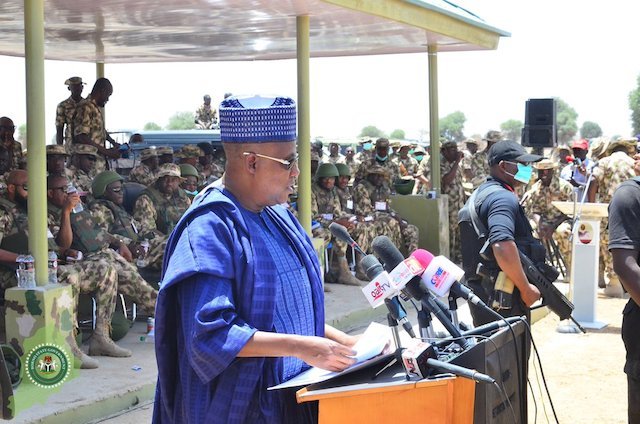 The All Progressive Congress vice presidential candidate Kashim Shettima’s attire at the opening ceremony of the annual general conference of the Nigerian Bar Association sparked the controversy.

Shettima arrived to the conference on Monday in Lagos dressed in a dark suit, a crimson tie, and some sneakers.

In response to a widely shared image of him sitting with his suit buttoned and tie protruding, his detractors charged that he lacked style.

The activist joined the challenge on Tuesday and shared a picture of himself on Instagram sporting a related attire.
Captioning the photo, he wrote: “Nothing my pikins no go make me do. I was ordered by one of my Area children to do the Shettima Challenge. Wahala for person wey no get tye Even though my shoe no show, but I try naah. Wetin u think?”

The attire that Kashim Shettima, the vice presidential candidate for the APC, wore to the Nigerian Bar Association’s Annual General Conference on Monday generated a lot of online discussion.

Former Borno State governor Mr. Shettima gained notoriety online after a picture of him wearing gym sneakers with a baggy suit surfaced on the Nigerian Twittersphere.

Bola Tinubu, the APC presidential candidate, was represented at the occasion by Mr. Shettima.

In classic GenZ form, it gave birth to the “#Shettimachallenge” fashion craze.

One of Nigeria’s most controversial entertainers, he is best known for his alternative lifestyle, political views, and media productions, most notably The Charly Boy Show. He has served as president of the Performing Musicians Association of Nigeria, and in 2011 was an Idol Series judge.