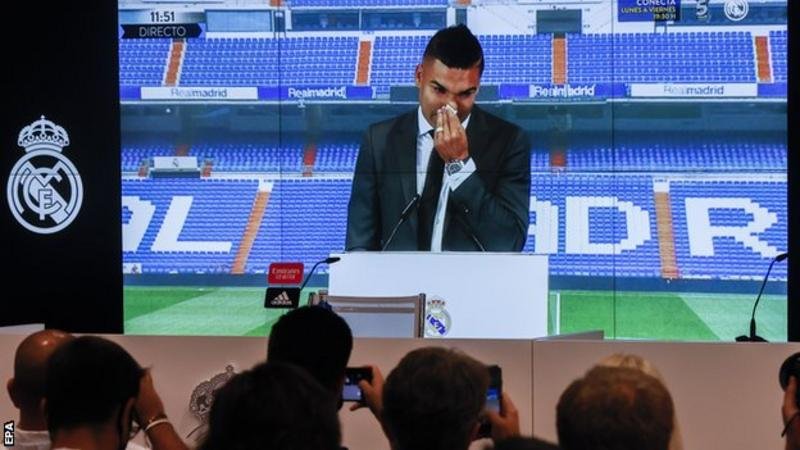 Casemiro said his impending move to Manchester United is not motivated by money as he bid an emotional farewell to Real Madrid on Monday.

The Brazil midfielder, 30, said he is joining “the biggest team in the world” after a nine-year spell with Real.

United have agreed to pay up to £70m to sign Casemiro on a four-year deal which would make him one of the top earners at the three-time European champions.

“If it was about money I would have left four or five years ago,” he said.

“Those people who think that are wrong, they don’t know me at all.

“The club has always treated me very well. It’s my decision, my path.”

After joining from Sao Paulo in 2013, Casemiro helped Real win the Champions League five times, plus La Liga three times and the Cope del Rey once.

He started last season’s Champions League final, as Real beat Liverpool to become European champions for the 14th time, and he made his 336th appearance for the Spanish giants as a substitute in last week’s opening-day win at Almeria.

“I spoke to my agent after the Champions League final as I had the feeling that I was coming to the end of my cycle here,” said Casemiro.

“It was the hardest decision of my life but I’m excited about what’s ahead of me. I want to face new challenges, know a different league, a different country and a different culture.

“I’m going to the biggest team in the world, that can compete with the greatness of Real Madrid, although now it doesn’t.”

United have lost their first two games of the new Premier League season and host Liverpool at Old Trafford on Monday.

Cristiano Ronaldo won four Champions League titles alongside Casemiro at Real but the Portugal forward has been strongly linked with a move away from Old Trafford this summer.

“I haven’t spoken to Cristiano, I hope he stays because he’s one of the best players of all time,” Casemiro added.

“Everything I did here, I want to do there too. I want to win the league there.

“I am going through one of the best moments of my career. I feel I’m really fit, mentally I feel great, and I feel like it’s a great moment to take this decision.”

“You have been exemplary every single day in all of these years here,” he said. “You have earned the right to decide your future and we must respect it.

“You leave the image of the champion that you are. You are going to a friendly club, the legendary Manchester United, but wherever you are you will always be an ambassador of Real Madrid.

“You will always be one of us. This is and always will be your home.”