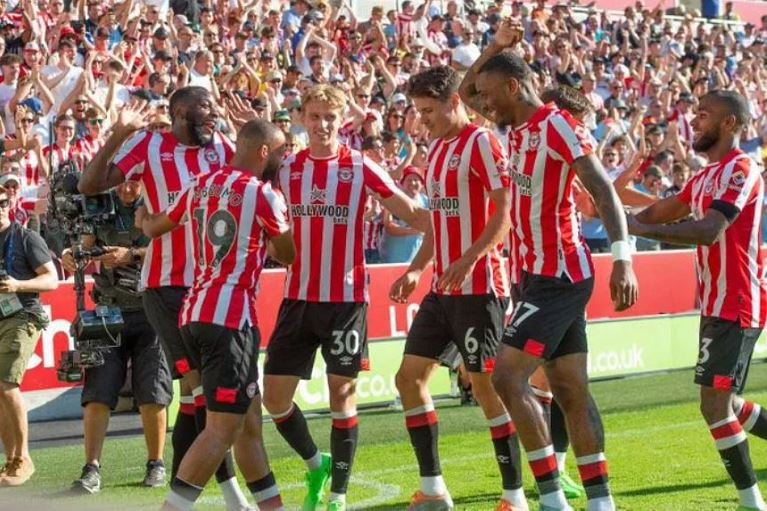 Manchester United put in one of their worst Premier League performances in 30 years of the competition as a catalogue of defensive mistakes saw them thrashed 4-0 by Brentford.

In an astonishing first half in some intense west London heat, goalkeeper David de Gea let Josh Dasilva’s simple shot crawl under his body at the near post after 10 minutes before the goalkeeper’s pass put former Brentford player Christian Eriksen in trouble, with Mathias Jensen gaining possession in the penalty area for a simple finish.

The Bees managed to double that advantage before half-time, with Ben Mee leaping over Lisandro Martinez to head home on his home debut before Ivan Toney fed Bryan Mbuemo to finish off a blistering counter-attack for their fourth after just 35 minutes.

Cristiano Ronaldo – recalled to the starting line-up – wasted three chances in a result that leaves Erik ten Hag’s side bottom of the Premier League with zero points, with Liverpool their next opponents at Old Trafford in nine days’ time.

In goal, De Gea was left red-faced – and that was not to do with the intense 32-degree heat that hit west London come kick-off.

Dasilva shaped to shoot with his weaker right foot but De Gea couldn’t get his body arranged to block the tame effort. Eight minutes later, Ten Hag’s defence and midfield tried to entice Brentford by playing out from the back – but couldn’t produce the quality to stop those who swarmed to get them.

Eriksen was foiled by his former midfield team-mate Jensen in the penalty area, with Brentford’s No 8 setting himself before rolling the ball past a wrong-footed De Gea.

To complete the set in the first half, United’s attack produced very little to test David Raya, even with the recalled Ronaldo starting up front. The 37-year-old produced a couple of snapshots which Raya both held and let fly harmlessly over his bar.

Another astonishing five-minute period put the game well and truly beyond United after just 35 minutes. Debutant Mee showed more tenacity than Martinez at the back post to nod in an efficient Brentford corner.

Then, as United tried to claim some sort of route back in the game, Brentford hit them on the break. Toney raced away to find Mbuemo in the middle, who hurdled a late challenge from Luke Shaw from behind to steer the ball past De Gea.

Ten Hag appeared to show his disapproval at half-time with a triple substitution. Tyrell Malacia, Scott McTominay and Raphael Varane replaced Martinez, Shaw and Fred – and there were some minor improvements after the break.

Ronaldo had two excellent chances to pull a goal back as Dalot found him twice in a lot of penalty area space – but headed wide, then over.

Eriksen himself twice went close as he headed straight at Raya before pulling a shot wide from inside the box. But Brentford managed to keep United at arm’s length – and didn’t need to get out of second gear after half-time.