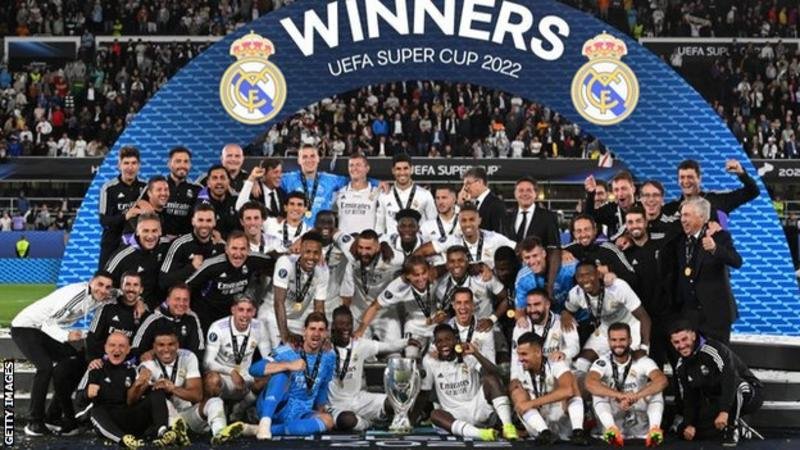 Karim Benzema broke Raul’s record with his 324th goal for Real Madrid as they beat Eintracht Frankfurt 2-0 to lift the UEFA Super Cup in Helsinki.

Carlo Ancelotti’s side, who beat Liverpool to win the Champions League in May, took the lead when David Alaba tapped into an empty net, with Frankfurt goalkeeper Kevin Trapp stranded following Casemiro’s header back across goal.

Benzema doubled the Spanish giants’ lead after the break with a first-time finish from Vinicius Jr’s cross to move second on Real’s all-time goalscoring list, overtaking Raul and behind only Cristiano Ronaldo who has 450 goals.

Frankfurt, making their Super Cup debut, had moments of their own – the best when Daichi Kamada was sent through early on, but the Europa League winners looked second best once Real hit their stride.

Benzema is coming off the most prolific season in his career, scoring 44 times in 46 games for Real Madrid to help his side win a Champions League and La Liga double – and he looks set to continue that form.

The 34-year-old, who captained Real in the Super Cup final, said this week former team-mate Ronaldo “helped me on and off the pitch”, but admitted he was able to adapt his game and score more goals once the Portugal star left.

After his goal on Wednesday, Benzema is second only to Ronaldo as Real’s all-time leading scorer and staring at individual accolades as well as team prizes, becoming the frontrunner to win the Ballon d’Or in October.

“He is an amazing centre-forward,” former England midfielder Owen Hargreaves told BT Sport. “The great players rise to these occasions. When they have needed Benzema, he has produced.

“If he doesn’t win the Ballon d’Or this season, he never will. I can’t see how he doesn’t win it. He is irreplaceable. He will age well because he has always been a smart player.

Former Real Madrid winger Steve McManaman added: “Incredible, exalted company. Huge iconic names in the history of Real Madrid – only got Cristiano above him and that says a lot.

“[He’s had} 610 appearances to get to where he has got and he deserves all the plaudits.”

Ancelotti named the same XI that started the Champions League final and there was a swagger to Real’s play that comes with being crowned European champions for the 14th time – and now adding a fifth Super Cup to their trophy cabinet.

Frankfurt, meanwhile, earned a place in the continent’s top-tier competition with their Europa League penalty shootout success over Rangers.

This meeting was their first against Real Madrid since a 7-3 defeat in the 1960 European Cup final and will give the Bundesliga side a gauge of what is to come.

After Japan striker Kamada failed to beat Thibaut Courtois to put the Germans ahead, they needed Brazilian defender Tuta to make a superb goalline block to deny Vinicius following a slick Real move at the other end.

Vinicius and Benzema have forged an almost telepathic understanding in attack and combined on the left to free the Brazilian, who shifted the ball onto his right foot and forced Trapp into a fingertip save from distance.

From the resulting 37th-minute corner came Real’s breakthrough, with Alaba handed the simplest of finishes from close range.

Benzema almost made it two with a fizzed half volley that was narrowly off target, but did get the goal he needed in the 65th minute to pull clear of former captain Raul on the club’s all-time scoring charts.

Once again it saw him combine with Vinicius, the young forward this time finding Benzema pulling away just inside the box and the veteran beat Trapp with a snappy effort to put the game beyond Frankfurt.

Casemiro had earlier curled against the bar from distance and Ancelotti, who suggested this week it was possible for Real to compete for all six competitions they are in this season, was able to hand debuts to new signings Antonio Rudiger and Aurelien Tchouameni.

“After we scored the first one we had more control and we didn’t take risks, didn’t play with super intensity but it was a good control,” said Ancelotti.

“They are used to playing together, they are comfortable, they know each other. It is simple to play together, to find the right time in the game.”