Barcelona yet to register Lewandowski, Raphinha ahead of La Liga opener
Advertisement 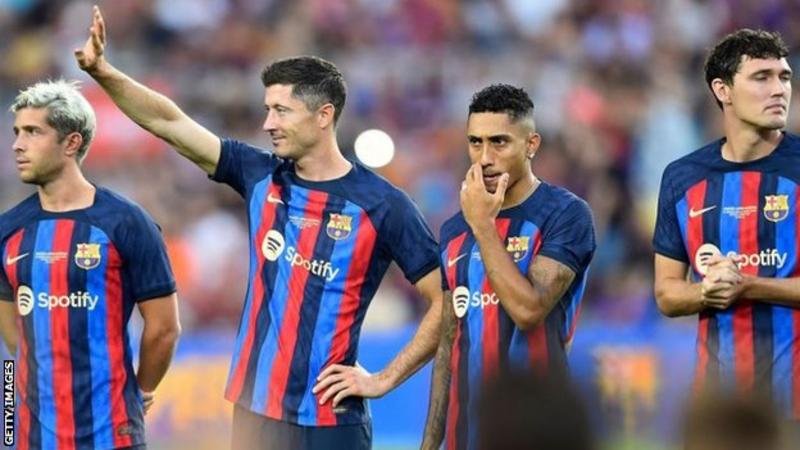 Barcelona are still to register any new players before this weekend’s La Liga opener with Rayo Vallecano.

Barca have been wrestling with severe financial issues, which need to be addressed to comply with La Liga’s strict financial regulations.

In effect that has meant the Catalan giants have sold off huge amounts of their future income in order to comply and register new players.

As well as Poland international Lewandowski from Bayern Munich and Brazilian Raphinha from Leeds, the club have also signed defenders Jules Kounde and Andreas Christensen and midfielder Franck Kessie.

However, Barcelona are still to satisfy La Liga and are now working on activating what is being referred to as a fourth ‘financial lever’, a significant stake in their Barca Studios commercial arm, in order to comply.

La Liga believe these changes will allow Barca to start registering new players, although there is a feeling at the league this may be done on an individual basis rather than all at once.

Barca’s financial strife is one of the reasons for the uncertainty over the future of Dutch midfielder Frenkie de Jong.

However, De Jong is owed millions in deferred payments from a restructuring of his Barcelona contract, which has come into force this season.

“Frenkie de Jong is a Barcelona player of great quality and we want him to stay,” Laporta told TV3.

“With him and his team-mates, we have a very powerful midfield.

“He has offers, but we want him to stay and he wants to stay too.”

Barca are also trying to move on a number of players, including defender Samuel Umtiti and forward Martin Braithwaite, who was booed before Sunday’s pre-season game against Pumas at the Nou Camp.

“They have understood that the best thing is to go play for another team,” said Laporta.

“Their contracts have always been respected, but the time has come when they have to take a step forward. This week they have to fix both of them.”