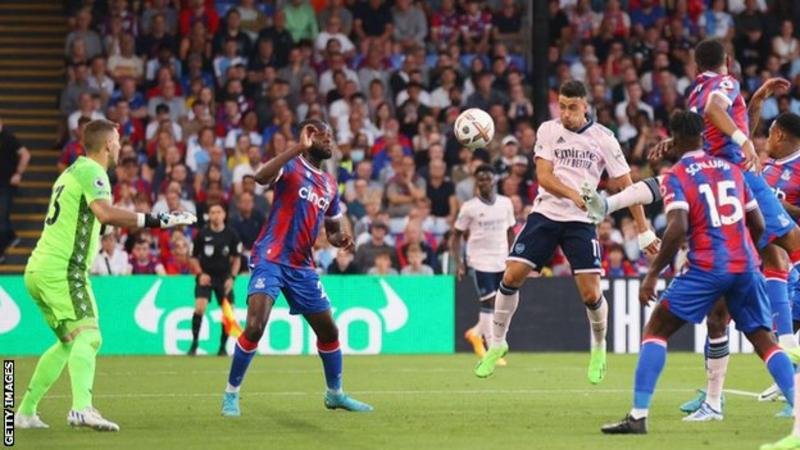 Arsenal got their campaign off to the perfect start as Mikel Arteta’s side beat Crystal Palace in an entertaining 2022-23 Premier League curtain-raiser at Selhurst Park.

The Gunners maintained their impressive pre-season form with an energetic performance that was rewarded when Gabriel Martinelli nodded in a 20th-minute opener from new signing Oleksandr Zinchenko’s headed assist.

It took Palace most of the first half to adapt to the visitors’ tempo, but once they did Odsonne Edouard forced Aaron Ramsdale into a save after Joachim Andersen’s header found him in the six-yard box.

Buoyed by a vibrant home crowd, the Eagles poured forward in search of a leveller but it was Arsenal who found the net again, Marc Guehi inadvertently heading Bukayo Saka’s fierce cross into his own goal late on.

Gunners lay down a top-four marker

Between Arsenal’s savvy transfer business, free-scoring pre-season form and being the focus of Amazon’s latest All or Nothing series, there has been plenty to whet their fans’ appetites this summer.

We may have to wait until the second series to learn whether Arteta piped Palace anthem ‘Glad All Over’ out during training before this one – as he did with ‘You’ll Never Walk Alone’ before visiting Anfield last season – or whether it was the Spaniard’s artwork that set the tone, but his side arrived with a relentless intensity that made Martinelli’s opening goal feel inevitable.

The 21-year-old Brazilian had earlier missed a glorious chance after Gabriel Jesus waltzed through the Palace defence, skewing wide of the far post after his compatriot’s effort was blocked, but he stooped to head in from a clever corner routine.

The Gunners lost their opening three league games last season, including another Friday night opener at Brentford, and ultimately narrowly missed out on a return to Champions League football.

But they have strengthened with the acquisitions of Jesus and Zinchenko from Manchester City and both already look set to have a big impact on Arteta’s young squad.

Jesus, who scored seven goals in five pre-season games, caused Palace’s back four problems with his relentless work-rate as well as his talent on the ball, and he laid on a chance for Martin Odegaard that the Gunners captain might have done better with.

It was another Arsenal debutant who really impressed, with 21-year-old centre back William Saliba – who has spent most of his three years at the club out on loan, producing a fine defensive display.

The Frenchman was part of a back four that had to show resilience amid the hosts’ growing threat, before Guehi’s own goal following a snappy Saka break made things more comfortable.

It was a result and performance that will have pleased Arteta, who recorded his 50th league win as Gunners boss, while simultaneously giving Arsenal’s top-four rivals a glimpse of what they are up against this term.

Palace boss Patrick Vieira was concerned this game had arrived too early after a disrupted pre-season that saw some of his squad not being able to travel to Singapore and Australia, some players remaining on the treatment table, and the Frenchman still hoping to make more transfer additions.

He also said he was happy with the business the Eagles have done so far this window, although only Cheick Doucoure started after arriving from Lens, and Palace struggled to deal with an irrepressible Arsenal early on.

The hosts, who took four points off Arsenal last season, did improve and Ramsdale’s save from Edouard’s header before the break was followed after half-time when the goalkeeper also denied Eberechi Eze following Wilfried Zaha’s pass in what kick-started a dominant spell for the Eagles.

Palace, who are looking to improve on their 12th-placed finish last season, were unable to capitalise on that pressure and were instead caught out on the break, but Vieira will want to wait until the end of the transfer window before giving a real assessment of where his side are.