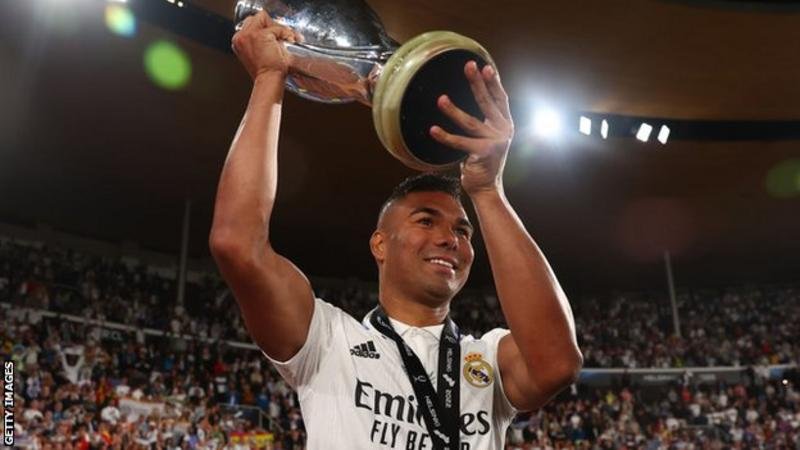 Real Madrid boss Carlo Ancelotti says midfielder Casemiro wants a “new challenge” and to leave the club as Manchester United close in on a deal worth up to 70m euros (£59.2m).

Talks have progressed quickly and United are optimistic the deal for the Brazil international, 30, will be completed in the next few days.

Casemiro trained with Real on Friday.

“The negotiations are ongoing right now, he is still our player but his will is to leave,” said Ancelotti.

“I have spoken with him. Casemiro, for what he has done and the person he is, we must respect that desire.”

The Italian added: “Casemiro wants a new challenge and we understand his feeling, I do not think there is a way back.”

💬 @MrAncelotti: “We are ready, we are in a good moment, we want to keep up the team’s good dynamic in order to fight and win.”#CeltaRealMadrid pic.twitter.com/VEnMWH8BJd

Casemiro has been with Real since 2013, winning three La Liga titles and five Champions Leagues.

United are bottom of the Premier League and host Liverpool on Monday.

Casemiro would become one of the United’s top earners if he completes the move and would sign a four-year contract with the option of an additional year.

After talks to sign Juventus’ Adrien Rabiot collapsed over the player’s demands, United have turned their attention to Casemiro as they look to address weaknesses in Erik ten Hag’s midfield.

Although Casemiro has a contract that runs to 2025, Real are mindful of the scale of United’s offer of a contract that could extend to 2027 once the option of an additional season is added on. They would not stand in his way if he decided to accept.

He would arrive at United on a big salary in keeping with his status as one of 30 players nominated for this year’s Ballon D’Or, even if his place at Real is under threat from new arrival Aurelien Tchouameni.

“Within the squad we have a replacement,” added Ancelotti. “Tchouameni has been signed for this position and at the moment he is one of the best midfielders on the market.

“There is also the option of [Toni] Kroos, who can play in this position, as he did the second year I was here. There is also [Eduardo] Camavinga.”

One of the best defensive midfield players in the world, Casemiro has been effective in a team that drops deep when it does not have possession, which Real tend to do with Luka Modric and Toni Kroos in their team.

Casemiro’s impact can be seen by looking at Opta statistics to compare his figures against those of other central midfielders in La Liga last season.

He also contributed to Real’s attacks, ranking fifth for forward passes and joint-sixth for shots among the league’s central midfielders.

Casemiro spent a season away from the Bernabeu on loan at Portuguese side Porto in 2014-15 but returned to Spain the following season after Real activated his buy-back clause.

He has made 222 appearances for the Spanish giants and scored 24 goals.