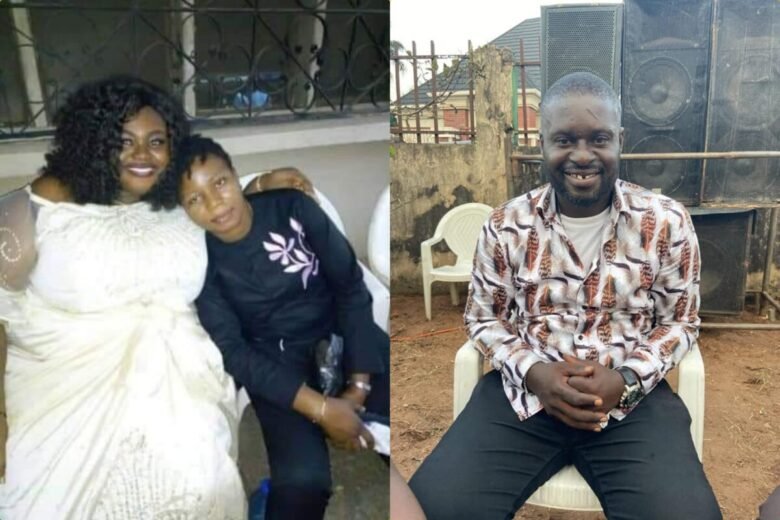 A man identified as ikechukwu Onuma popularly known as Ayaaya Onye-Obodo, has been stabbed to death allegedly by his wife’s lover in Onitsha, Anambra State.

The unidentified woman killed the husband, who was a staff of the College of Health, Onitsha, stabbing him to death with a knife.

It was gathered that the incident happened at the deceased residence, along Ogboli road, Onitsha, Anambra State, on Tuesday, at 9:20pm.

The deceased came home unannounced on Tuesday night to meet his wife in bed with another woman, making out.

Sources in the area said his wife, unknown to him was a lesbian, and had been keeping a female sex partner.

The lady was said to have quickly attacked the man with a kitchen knife, stabbing him to death, during an argument, in a bid to silence the deceased.

According to the source, “The news has been everywhere in Onitsha today. People are so surprised how Ayaaya was killed.

“He was a very handsome guy, and he was an Admin staff at the college. How his wife left such a handsome young man to become a lesbian to the point of bringing sexual partners to the house is still a wonder.”

Another source said, “Ikechukwu is a very popular guy in the neighbourhood. He was also known as ‘Onye Obodo’. He got married to his wife in 2019.”

The police authorities in Anambra State confirmed the incident, saying that the lesbian partner has been arrested.

The state Police Command’s spokesperson, DSP Tochukwu Ikenga, said, “We have a suspect in custody and the Commissioner of Police, CP Echeng Echeng, has ordered the immediate transfer of the case to the State CID for proper investigation.

“Preliminary information showed that the suspect stabbed the victim in the chest. He was rushed to the hospital before he was confirmed dead by the doctor on duty.

“What brought about the suspect’s action has not been ascertained, meanwhile investigation has just begun.”

Meanwhile, friends of the deceased have taken to Facebook to mourn him and demand for justice.

One Egboka Ogunji said; “Onitsha youths let’s put an end to this lesbian of a thing”

“My heart goes out to every member of the Onuma’s family in Onitsha Anambra State over the sudden and painful death of your beloved son, brother, uncle and husband Ikechukwu Onuma a.k.a Ayaaya Onye-Obodo. It is indeed a great loss,” Mazi Chukwujindu wrote.

Akunne Obiesie said he was with the deceased hours before the incident.

“Ikechukwu Onuma, nwokem kedu si ife menu.. Death why? Why? It’s damm fucking hard to believe that you just passed on this night!! God why? Over unnecessary damm shit, damm fucking shit!!! Why FUCKING AYAYA at this point? A jolly fellow, a deesrst friend and a brother to the heart. Alili Egbugom. chaii!!!! Am damm bloody cold this night….We were together today just few hours from this night. Ebele Onochie you can only run but you can never hide from your own death. Ani Onitsha kedu ife na emenuRest in the bossom of the Lord Strong” he wrote.