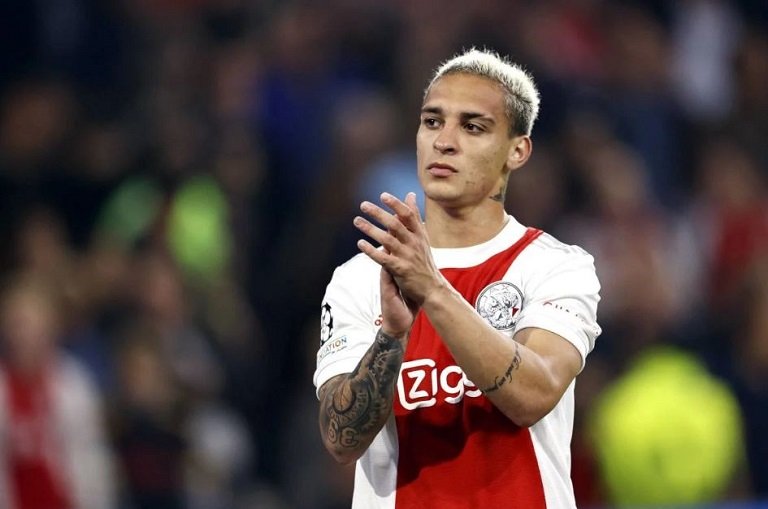 Ajax have rejected a bid of 80m euros (£67.6m) from Manchester United for Brazil winger Antony, 22. (The Athletic)

Manchester United will double Casemiro’s salary by signing the 30-year-old Brazil midfielder from Real Madrid on a four-year deal worth £350,000 a week. (Sun)

Real Madrid see Newcastle and Brazil midfielder Bruno Guimaraes, 24, as the ideal potential replacement for Casemiro. (AS – in Spanish)

PSV Eindhoven will not entertain a bid from United for Netherlands attacker Cody Gakpo, 23, until after their Champions League play-off second leg at home to Rangers on 24 August. (MailOnline)

Manchester City do not want to sell midfielder Bernardo Silva, 28, despite interest from Paris St-Germain and Barcelona in the Portugal international. (Sky Sports)

Everton had been linked with Tottenham‘s English midfielder Harry Winks, 26, but Toffees boss Frank Lampard has decided to walk away from the deal. (Times – subscription required)

Borussia Dortmund will not pursue an opportunity to sign Manchester United’s Portugal forward Cristiano Ronaldo, 37, because of his age and wage requirements. (Bild – in German, subscription required)

Chelsea will consider loaning forward Christian Pulisic, 23, to Manchester United if the USA captain agrees an extension to his current contract, which has two years left to run. (MailOnline)

Besiktas hope to finalise a deal for Everton’s Dele Alli so that the former England midfielder, 26, can be in the stands for Sunday’s game against Fatih Karagumruk. (MailOnline)

West Ham are thought to have made another bid for Belgium and Club Bruges midfielder Hans Vanaken, 29, after their first offer was turned down. (Sky Sports)

AZ Alkmaar have turned down bids of about 15m euros from Bournemouth and Celta Vigo for Jesper Karlsson, 24, despite the Sweden striker’s desire to leave the Dutch club. (De Telegraaf – in Dutch)

Watford have rejected a second bid from Newcastle for 20-year-old Brazilian forward Joao Pedro, thought to be about £22m plus £3m in add-ons. (The Athletic – subscription required)

Talks are still ongoing between both clubs despite the second bid having been turned down. (Fabrizio Romano)

Crystal Palace are interested in signing 24-year-old France midfielder Houssem Aouar from Lyon, despite reports that he has agreed personal terms with Nottingham Forest. (L’Equipe – in French)