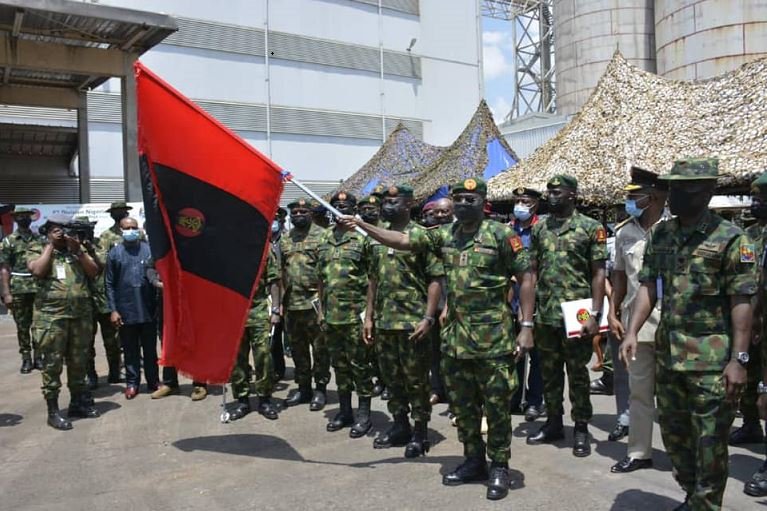 Authorities of the Nigerian Army have refuted claims that a total of 243 troops recently left the force due to low morale and unfavorable working circumstances, noting that the soldiers voluntarily applied, which is customary in the military.

Director of Army Public Relations, Brig Gen Onyema Nwachukwu made this known in a statement titled, “Voluntary Retirement or Discharge is a Routine in the Nigerian Army”.

It reads, “The allegation that soldiers of the Nigerian Army (NA) are proceeding on voluntary retirement due to alleged corruption, poor service conditions and low morale as recently reported by some outfits in the social media is nothing but a concoction of the imagination of the unrepentant enemies of the nation and mischief makers and should be outrightly discountenanced by the public.

“The subjective and unethical report is a distraction and another failed attempt at dampening the morale and fighting will, of the loyal, dedicated and patriotic fighting force of the NA.

“Perhaps these impenitent mischief makers need to be schooled to understand that the NA is not a conscript Army and that recruitment into the NA is voluntary with extant policy on discharge and retirement of soldiers and officers respectively, like other organizations.

“This provides its personnel the opportunity to apply for voluntary discharge, when they deem fit and meet the terms and conditions as stipulated in the Harmonized Terms and Conditions of Service soldiers/ratings/airmen (Revised) 2017.”

It is thus, the inalienable right of a personnel to voluntarily or on medical grounds apply for discharge, if they meet the terms.

“It is therefore not an aberration that the COAS granted approval for 91 NA/32/4792 WO Ndagana Ishiaku and 242 others to voluntarily discharge from the NA, as being unprofessionally manipulated by some media.

“Given the mannerism of the ill-fated report, it is clear, that it is targeted at deflating the high morale of troops by downplaying recent critical interventions by the COAS Lt Gen Faruk Yahaya on troops’ welfare, which include car loans, housing loans, extensive construction of new accomodation, massive renovation of old and dilapidated accomodation, building of befitting residences.

Others include issuing of vehicles to Regimental Sergeant Majors, scholarship awards to children and wards of fallen heroes and other unique interventions in the theatres of operation to sustain the heightening morale of troops.

“These interventions evidently account for troops’ game changing onslaught in the Noth East.

“It must also be mentioned, that the quantum of equipment that have been injected into the theatres and prompt payment of operational allowances, have all turned the tide against the insurgents.

“Also worthy of note is the welfare flight for troops, which has significantly reduced the burden of troops travelling in and out of the theatres, in addition to huge commitment on the medical needs of wounded-in-action soldiers and the barracks communities.

“Equally important, is the fact that troops are now being regularly and consciously rotated from the frontline, hence, issues of overstay and battle fatigue are gradually being overcome.

“Suffice to say, that some of these recently discharged soldiers are beneficiaries of these giant strides.

“The COAS, once again congratulates the discharging personnel for their gallantry, patriotism, loyalty and courage while in service and wishes them the very best as they successfully exit active service from the NA.

“He also reiterates his avowed determination to continue to have direct impact on the welfare and wellbeing of both serving and retired personnel.

“He is also assuring the retirees that soon, their various commanders would organise a farewell luncheon in their honour, as it is the practice in the NA since Gen Yahaya took over command.”