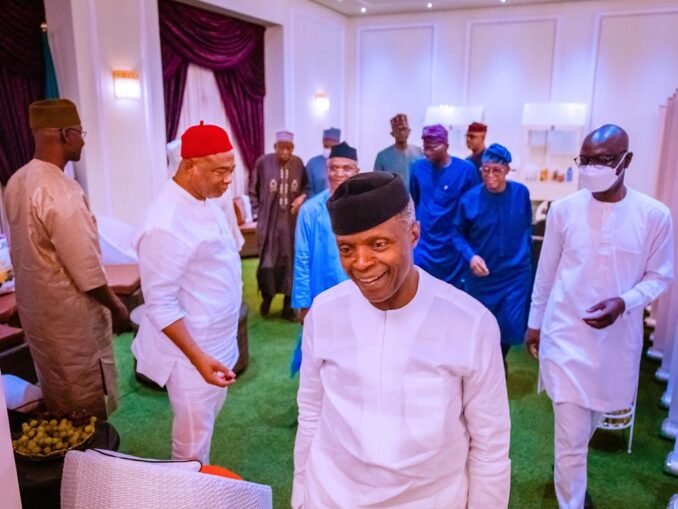 Eleven All Progressives Congress (APC) governors have visited Vice President Yemi Osinbajo at the presidential villa on Tuesday following his return to work after undergoing a surgical operation on his leg four weeks ago.

According to sources close to the meeting, the governors also discussed the 2023 presidential election and the importance of the Vice President to the success of the election.

The sources said that national issues including the ongoing Academic Staff Union of Universities (ASUU) strike and the dwindling economy.

Among the governors present were Governor Babajide Sanwo-Olu of Lagos, Governor Dapo Abiodun of Ogun, Governor Kayode Fayemi of Ekiti and Governor Sule Abdullahi of Nasarawa.

Other governors at the meeting are Governor Simon Lalong of Plateau who is also the Director of the Tinubu/Shetiima Campaign Organisation, Governor Inuwa Yahaya of Gombe State, Governor Badaru Abubakar of Jigawa and Governor Abubakar Bagudu of Kebbi.

Chronicle NG reports that Prof. Osinbajo had previously kicked against the Muslim-Muslim ticket of the APC.

“The governors came to see him about some very important national issues because they know he has the leadership qualities and patriotism to resolve them,” a source said.

“The ASUU strike and economy were two issues that were raised and the governors called for his intervention.”

The source added that, the governors commended him particularly for using local doctors for his surgery and for the leadership he provides at the National Economic Council.

Osinbajo to APC Governors: We need to act fast on ASUU strike, economy