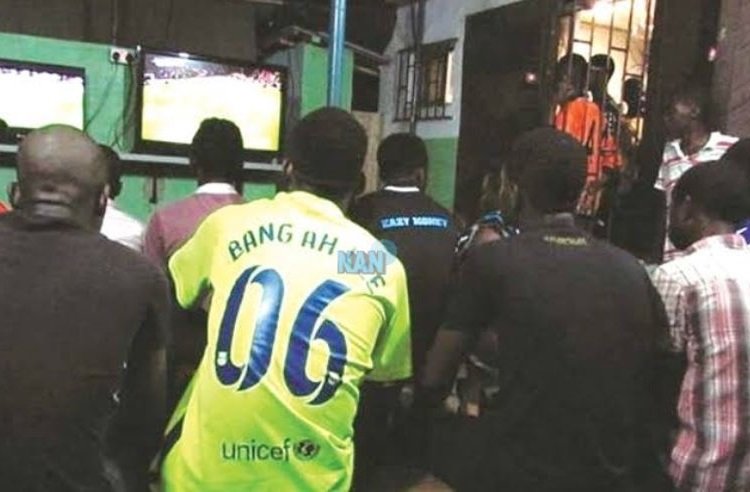 A living room is a place in a home that is supposed to be for family time, bonding and watching television, but men’s obsession for football lately is making the living room become a war zone between couples.

With their husbands’ eyes and souls glued to the television screen displaying a football match, would wives agree to share the attention of their men with football?

Football is a game which engages every soul interested in it, with its suspense, disappointments, shock, failure, success and at last, victory. Do wives accept to bear this cross?

The News Agency of Nigeria (NAN) on Monday spoke with some women in Lagos metropolis to get their feelings about this.

Adelusi said that the mood of the house depends on her husband’s favorite club.

“If Chelsea loses a match, the whole house will feel the impact. But if they win, ask for anything and he will give you.

“Sometimes I wonder how rich he would be if he got paid for his dedication, and my question, why should a happy moment in my household be determined by the result of a football team?” she said.

Mrs Catherine Bamgbose, CEO, Tulips Beauty Glow and mother of one, said her husband gives much attention to football and hates being disturbed when watching football.

“If you disturb my husband when watching a match, he doesn’t mind, he switches his phone on and watches it online.

“That is the only time I get to serve him any food of my choice and he doesn’t pay enough attention to complain.

“He loves football to the extent that he won’t eat for hours if his favorite club, Barcelona, loses,” she said.

According to Mrs Gloria Ndubuisi, a lawyer and a mother of four, her husband watches football with so much passion as if his life depends on it.

“In the beginning of our marriage, it caused lots of problems. Sometimes, when there’s power outage, he would fuel the generator with a part of the children’s school fees to watch a match and I will be bitter.

“There was even a time he slapped our eldest daughter for changing the channel to Zee world. It was a horrible experience,” she said.

Mrs Lynda Essien, a business woman and a mother of one, said her husband hates it when someone changes the channel while he’s watching a football match.

“My husband becomes moody when his favourite club, Manchester United, loses a match. But he comes around after some time,” she said.

For Mrs Martha Orakwe, a teacher and a mother of six, her husband’s weakest point is football.

“My husband’s Achilles heel is football. He is very collected and gentle but when it comes to football, I don’t recognise him and get his attention anymore,” she said.

Orakwe said that her husband not only watches a football match on television but also listens to the commentaries on radio,even while driving.

“I remember a time my husband’s favourite club Chelsea lost a match. He heard this from the commentary on radio and we almost had an accident that day,” she said.

Mrs Funmi Adekunle, a businesswoman and mother of two, said that she had no choice but love football because of her husband’s obsession for the game and to avoid conflict in her home.

“My husband is more than a football lover. I decided to join him and be a football fan than to be fighting with him over the television remote,” she said.

Adekunle advised wives to give up the fight over the remote or channels and join their husbands to watch and love the game.

“Football is a game that binds people together. It brings together different nations, tribes, colour, races, and even religion. This is the same game that will bring your family together.” she advised.

However, some men, in their reactions told NAN that watching football helped them ease their stress and temporarily makes them forget their daily challenges.

“As a man, there are lots of challenges we face daily, but the thought of watching your club play brings excitement; I don’t think men do this thing to spite their wives.

“A match either at home or at bar with a chill drink relaxes the body, I stopped following a particular club because of several failures from them, so these days I just enjoy quality football and rest,” he said.

Mr Ikenna Ofem, told NAN that the battle for television remote when he is watching his favourite club play, made him buy a dual view decoder.

“With this, I can be in my room to watch my favourite sport channels without disturbance, while the rest of the family watch their favourite channels in the living room.

“It was expensive getting another TV and running the whole package but it was worth it, it was almost becoming a tug of war in my household,” he said. (NAN)