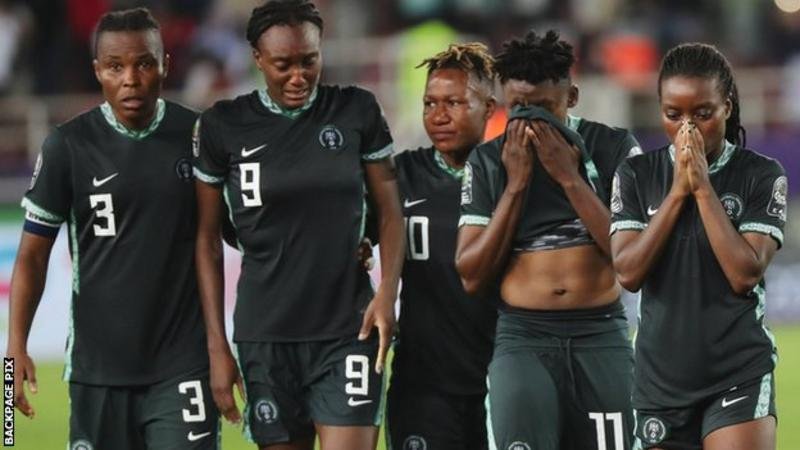 Super Falcons are in dispute with Nigeria Football Federation (NFF) ahead of their third-place play-off at the Women’s Africa Cup of Nations (WAFCON).

None of the Super Falcons players has received their allocated allowances or bonus of over $10,000 for the wins over Botswana, Burundi and Cameroon.

The players boycotted training on Wednesday evening, prompting the NFF to act swiftly in order to prevent another strike before the match against Zambia on Friday.

“The players have refused to leave their hotel in Casablanca over unpaid bonuses,” a top NFF official told BBC Sport Africa.

“There is also an issue over the unpaid first five days of camp, which the players expected in their bank accounts but has not arrived.”

The financially-stricken NFF, which receives its funding from the Nigerian government, has made a $1,000 payment to each player of the nine-time African champions to cover their 10 days’ allowance.

NFF president Amaju Pinnick told BBC Sport Africa on Wednesday that his organisation is “dealing with the issue” – but funds need to come from the country’s Sports Ministry before any payment can be made.

A special adviser to the minister of sports Sunday Dare said the “issues are being resolved” and the team has received verbal assurances that they will be paid.

“The issues are being resolved and the NFF has assured the team they will get all that is due them,” Toyin Ibitoye said.

“The sports ministry has presented NFF’s request for financial intervention to the relevant quarters and it is receiving urgent attention.

“The processes for receiving funds from the government take time and the team now understands this. Both the ministry and NFF are working to ensure things move at a faster pace.”

It is not the first time players of Africa’s most successful women’s side have protested over unpaid bonuses.

Beaten by hosts Morocco in a dramatic semi-final on Monday, the Super Falcons – champions last time out – are understood to be concerned they will not be paid after the tournament.

Nigeria’s women’s team – the Super Falcons – have twice been involved in sit-in protests in hotels at previous WAFCONS.

The first came in South Africa in 2004 after the West Africans won the title, with another in 2016 in Abuja after claiming their eighth continental crown in Cameroon.

At the 2019 Women’s World Cup in France, the players staged another sit-in protest over unpaid salaries and bonuses after their Round of 16 elimination by Germany.

Following a recent payment review, the players can also expect $5,000 for their win in the quarter-final, but they will miss out on proposed payments of $7,000 and $10,000 for victories in the semi-final and final respectively.

“The Bishops are not fake” Tinubu campaign reacts