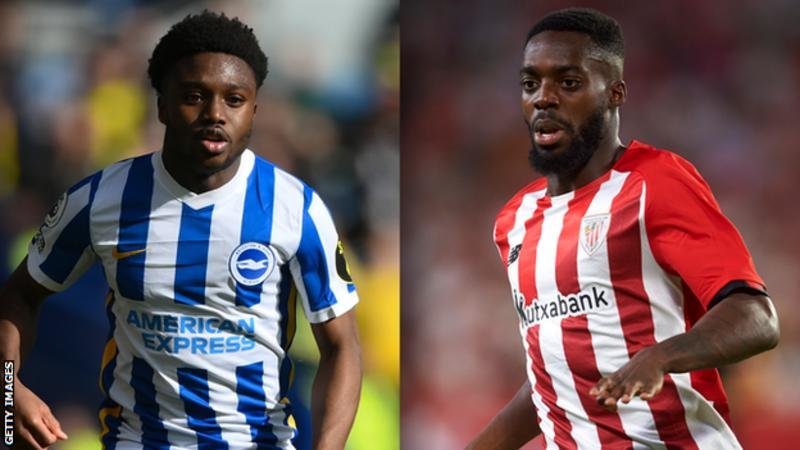 Brighton defender Tariq Lamptey and Athletic Bilbao forward Inaki Williams are among five players who have switched their international allegiance to Ghana.

London-born Lamptey, 21, represented England at youth levels while Williams, who was born in Bilbao to Ghanaian parents, was capped once by Spain.

Wing-back Lamptey had looked set to switch to the West African nation after asking to be left out of the England Under-21 squad for the European U21 Championship qualifiers last month.

Lamptey and Williams join three players based in Germany – Stephen Ambrosius, Ransford-Yeboah Konigsdorffer and Patric Pfeiffer – in committing to the Black Stars ahead of the 2022 World Cup in Qatar.

Uncapped German-born defender Pfeiffer, 22, plays for Darmstadt 98, but Hamburg’s duo of Ambrosius, 23, and forward Konigsdorffer, 21, have both represented Germany at under-21 level.

The Ghana Football Association (GFA) expects their availability will help take the West Africans to the next level.

“The availability of these players means a lot to the Ghana Football Association and the technical team of the Black Stars,” GFA president Kurt Okraku said.

“We have always maintained that we will not limit ourselves to only a small group of players but would scout top talents across the globe who are ready to sacrifice for the nation and to take us to the next level.

“This gives the technical team more options to choose from adding to our continuous desire to improve the team.

“Coach Otto Addo and his technical team will continue to monitor and assess them for future assignments including the September games and the World Cup in Qatar.”

The decision by the GFA to make public overtures toward diaspora-born players has often been characterised by negative headlines and caused polarisation among fans of the four-time African champions.

But slowly that is starting to change, following the recent capture and contribution of Belgian-born Denis Odoi towards their 2022 World Cup qualification.

“This [commitment of the quintet] follows exhaustive engagements between the leadership of the GFA, the players and their parents in the last few months. The players are therefore available for selection in our upcoming international fixtures,” the GFA said in a statement.

Players can switch national sides as long as they they have played no more than three competitive matches at senior level prior to them turning 21.

However, appearances in World Cup or continental finals such as the European Championships would prohibit a change of eligibility.