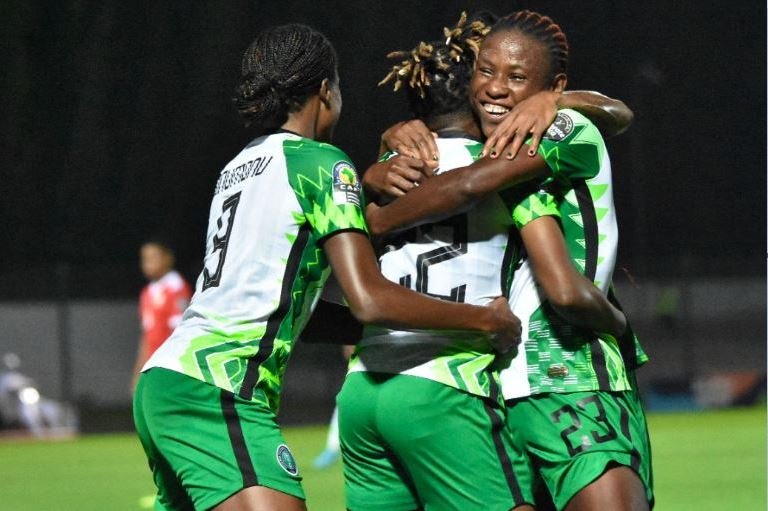 The Super Falcons of Nigeria have progressed to the next round of the Women’s Africa Cup of Nations thanks to a 4-0 thrashing of minions Burundi on Sunday.

Rasheedat Ajibade and Peace Efih both scored one goal each while Uchenna Kanu bagged a brace to help Nigeria reach the quarter-final.

The Super Falcons will face rivals Cameroon in the quarterfinals in Morocco.

Burundi did a good job holding Nigeria in the first 25 minutes of the game but the goals began to pour in after Ajibade outpaced a Burundian defender and was felled by the goalkeeper to win a penalty.

The Atletico Femeni forward took the penalty and scored to give Nigeria the first of three quick goals.

Three minutes later, Efih scored the second on the 28th-minute goal following a poor clearance by the Burundi defence after a fine run and cross by Ajibade.

Kanu scored the fourth a minute after to put Nigeria in the driving seat ahead of the second half.

Kanu soon got her second from a deft and well-weighted Ajibade cross early in the second half as Nigeria’s scored their seventh goal of the competition so far.

The Super Falcons lost their first game against South Africa 2-1 and that has cost them the group’s leadership after Banyana Banyana defeated Botswana 1-0 in their final group game.

Nigeria has now scored 174 goals since the competition started some decades ago.

Waldrum’s next target is to qualify for the semifinal which will ensure Nigeria’s World Cup ticket.

🕓FT’ in Rabat| We are through to the quarterfinals of the #WAFCON2022 after finishing second in Group C.

We will face Cameroon on July 14 for a semifinal spot