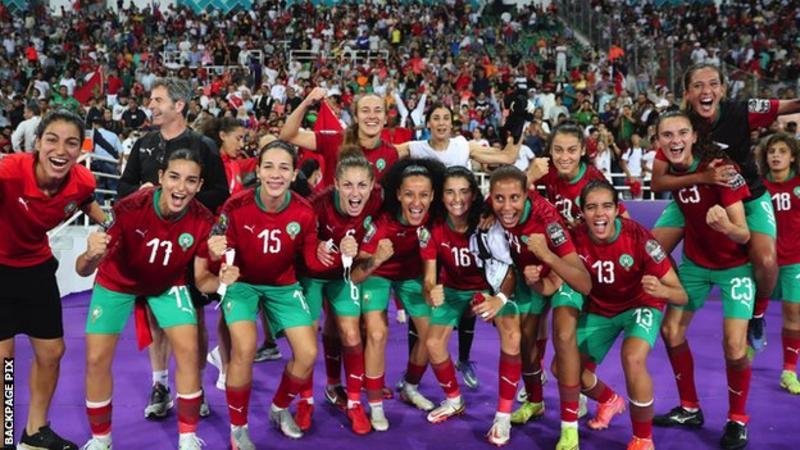 Morocco will face South Africa in the final of the Women’s Africa Cup of Nations (WAFCON) after the hosts beat nine-woman Nigeria 5-4 on penalties following a 1-1 draw.

Atlas Lionesses goalkeeper Khadija Er-Rmici denied Ifeoma Onumonu in the second round of the shootout, allowing Rosella Ayane to stroke in the winning kick.

After having midfielder Halimatu Ayinde dismissed, Nigeria took the lead through an own goal from Yasmine Mrabet before Sanaa Mssoudy quickly equalised.

The defending champions then had forward Rasheedat Ajibade sent off with 19 minutes left, and a resolute defensive display saw the match go the distance.

It was one-way traffic in extra-time, but the North Africans could not find a way past Nigeria goalkeeper Chiamaka Nnadozie and Gift Monday almost won it for the Super Falcons when her fierce effort cannoned back off the crossbar.

But Morocco held their nerve in front of a packed stadium in Rabat to dump out the nine-time winners and ensure there will be a new name on the WAFCON trophy on Saturday.

Linda Motlhalo kept her cool to convert in the 94th minute after Martha Tembo was adjudged to have fouled Jermaine Seoposenwe.

Coached by former Lyon boss Reynald Pedros, Morocco had played slick football en route to the semi-finals but failed to find their rhythm in the first half against continental heavyweights Nigeria.

They were almost caught out by a short back-pass to Er-Rmici, but Ngozi Okobi-Okeoghene failed to capitalise as she shot wide.

Yet Morocco had looked like they would take control when Ayinde was sent off three minutes after the restart for a stamp on the heel of Ayane, a decision made after the intervention of the video assistant referee.

Osinachi Ohale headed off the line to deny Morocco captain Chizlane Chebbak and moments later Nigeria skipper Onome Ebi diverted a cross onto her own post before Ashleigh Plumptre scrambled the ball clear.

Yet it was Nigeria who took the lead through a freak goal, as a header from striker Onumonu rebounded off the post and an intended clearance rebounded in off Mrabet.

Morocco quickly levelled after the otherwise-solid Nnadozie spilled a cross and Nigeria were reduced to nine when the lively Ajibade had a yellow card upgraded to red – following another VAR check – for catching Zineb Redouani with her studs.

The hosts almost won it in normal time, but Fatima Tagnaout and Chebbak blasted narrowly off target and Nnadozie clawed away a low Mssoudy effort.

After a host of further chances in extra time, a partisan crowd of 45,562 in the Prince Moulay Abdellah Stadium – a record attendance for a game on the African continent – were relieved to be able to celebrate Morocco’s passage to the final.