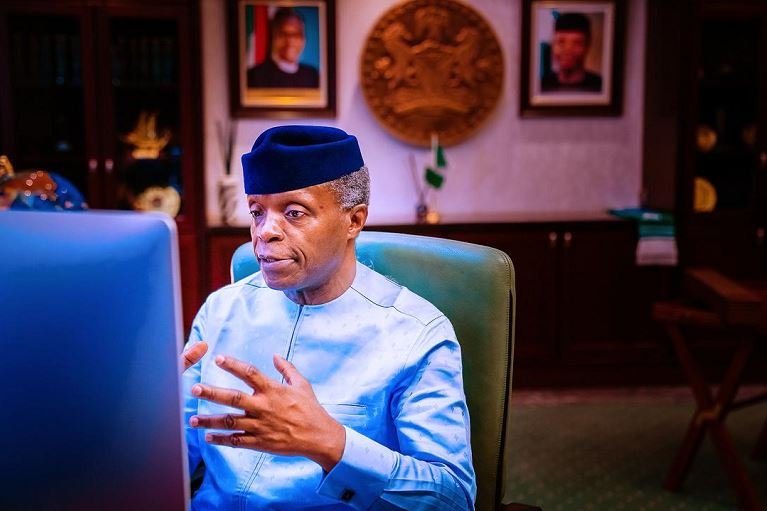 A group, PYO Global, comprising Nigerians at home and in the Diaspora who are in support of Vice President Yemi Osinbajo have commended the VP for choosing to undergo a surgical procedure in a Lagos hospital thereby boosting Nigerian doctors and the healthcare sector.

The group, in a statement today signed by its Deputy National Coordinator, Temi Okesanjo says the VP using Duchess International Hospital in Ikeja for the operation is a welcome development and a remarkable deviation from the usual practice of Nigerian politician and leaders preferring to travel abroad for medical tourism and treatment.

It called on Nigerian politicians and individuals to emulate the VP for his exemplary show of patriotism and national pride in the competence and capability of its home-based doctors, which the group noted have world-class capacity that can be deployed locally.

Osinbajo, who underwent a femur surgery on Saturday, has been widely praised by many prominent Nigerians for undertaking the surgical procedure in a Nigerian hospital.

Below is the full statement from the Group:

We want to use this medium to join well-meaning Nigerians, individuals and groups, to commend His Excellency, Vice President Yemi Osinbajo, SAN, for trusting local doctors and Nigeria’s medical facilities in Nigeria for the surgical procedure he underwent a few days ago.

In a statement on Saturday, VP’s spokesperson, Laolu Akande disclosed that the Vice President was admitted to and then had a successful femur surgery at the Duchess International Hospital based in GRA, Ikeja, Lagos State, Southwest Nigeria.

According to the statement, it was on account of a fracture of his right femur (thigh bone), possibly related to a longstanding injury associated with a game of squash.

That His Excellency, the Vice President of the Federal Republic of Nigeria submitted himself to a surgical procedure in a hospital at home in Nigeria is indeed a fresh and welcome development, especially with the prevalence of medical tourism by many of Nigeria’s political leaders and elites, who prefer to go abroad and other Western countries for sundry medical procedures and common treatments.

The Vice President has always been at the forefront of advocating for the use of Made-in Nigeria products and services. This is just another testament of his commitment to national ideals, rebirth and development, and fidelity to core values for societal transformation.

This is a positive departure from the usual practice of many Nigerian politicians, who shun its home-based facilities and neglect its health sector by undertaking medical tourism abroad, thereby failing to empower our local medics at home.

Our leaders would much rather repair to functional climes possessed of robust and efficient healthcare sectors than look inward and hunker down to fix the country’s comatose hospitals.

But in undergoing a surgical procedure at home in Nigeria, VP Osinbajo has not only shown exemplary leadership, he has also shown faith and trust in the competence and capabilities of Nigerian-based local doctors and in the capacity of home-based medical facilities.

Indeed, like the Vice President has said on several occasions in the past, Nigerian doctors are some of the best all over the world and should be encouraged to continue providing world-class services in their home country, instead of seeking greener pastures in Western countries.

History is filled with leaders who have used leadership by example to solve domestic problems. We know the story of Jawaharlal Nehru, first prime minister of post-colonial India. Through leading by example, he helped boost the country’s textile industry through patronising locally-made fabrics.

In 1989, Mahathir Mohamad, prime minister of Malaysia, had a heart attack. His doctors recommended surgery in the US but he objected. His reason “I had to have faith in our Malaysia doctors,” he said. According to him, “If I didn’t make an example of my myself, no one else would have confidence in our medical service.”

PYO Global comprises of Nigerians (and non-Nigerians) from all over the world who support the Vice President and his efforts in advocating in words and deed for a new Nigeria. Like the VP, this group also see the great potential of Nigeria beyond our shortcomings and present reality.

From the wide commendations he has received from Nigerians at home and abroad, the Vice President, has again proved the significance of why Nigerian leaders must lead by example and encourage more faith in Nigeria’s health sector, while boosting national pride in the talents and potential of our people across different sectors.

VP Osinbajo’s exemplary display of leadership also displays commitment towards improving the standard of living of citizens by local patronage, rather than jetting out to receive any form of medical treatment as many political elites are wont to do. Again, the Vice President has shown that with the right actions from political leaders, a new Nigeria is possible.

Also to be commended is the professionalism and transparency displayed by the Office of the Vice President ahead of his hospital visit. The OVP’s media team promptly and fully disclosed the issue at hand, and what was being done to address it, and where.

For too long in our own dear native land, the health status of our leaders has, by default been shrouded in secrecy. It was such a proclivity for non-disclosure that almost precipitated a constitutional crisis on leadership in the waning days of late Umaru Yar Adua’s administration as life ebbed from the President despite vehement denials from his inner caucus.

Our leaders are public figures. Their health and fitness have direct implication on their ability and capacity to perform the constitutional duties of their office. The citizenry and the country at large have a right to know, a right to the full disclosure of the health status always, of those who purportedly lead them in different political positions.

However, in as much as there is no law that compels them to do so, Nigerian leaders, often, prefer to complicate issues where matters of their health are concerned. This is because societally, ill health or frailty is viewed as a weakness, and our leaders cannot afford to exhibit weakness to their constituents, who have a mental stereotype of a brutish strongman as the best suited to lead.

The Vice President’s full disclosure of his ailment and the interventions taken to address it is a step in the right direction in making our political elites realise that public knowledge and awareness of their medical issue is not a source of weakness, but rather a source of strength which encourages transparency, empathy, tolerance, and understanding between those who govern and the governed. This is even moreso when they seek medical interventions available to all and sundry in the country.

Also, taking the public into confidence on an issue as personal as one’s health breeds trust; it makes the public feel that they are a part of the leader’s life and they are important to him, especially when we had seen repeatedly political leaders spend so many days abroad on medical leave for undisclosed ailments.

The rigours of leadership and political office put such a strain on the human body that anyone who is less than fully fit and healthy will have a grueling time meeting up to the demands of high office. We see how quickly performing technocrats in high office acquire gray hair as the demands of their job take a toll on their physical beings.

That the Vice President actively plays squash while in office to the point that he sustained an injury during a game, is a testament to the fact that sedentary, geriatric leaders don’t do a people much good, particularly not in a developing country where dynamism, creativity, youthfulness, commitment, and passion are the attributes most needed to move the country forward.

We call on the Nigeria political elite, among others, to emulate the VP for his exemplary show of patriotism and national pride in the competence and capability of our home-based doctors and medical facilities.

We also call on respective local, state and federal governments to continue to ramp up collective efforts to improve the country’s health sector.