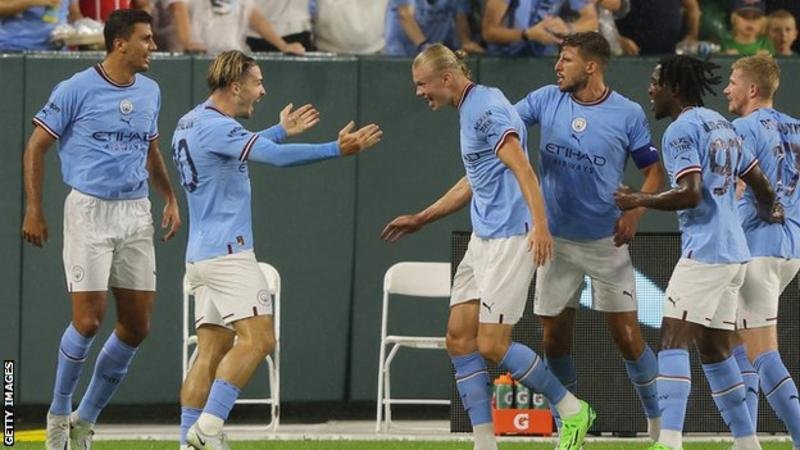 Erling Haaland scored on his debut as Manchester City beat Bayern Munich in a match twice held up by a lightning storm in Wisconsin on Saturday night.

Haaland, who joined City for £51.2m from Borussia Dortmund, scored after 12 minutes in the pre-season friendly.

The 22-year-old missed the first match of City’s US tour, against Mexico’s Club America, with injury niggles.

Haaland’s goal came from a whipped cross from man of the match Jack Grealish, with the Norway international finishing from close range.

Guardiola said: “He scored a goal which is important, these type of goals in front of the keeper – always he’s there.

“We’ll see how he reacts to the niggles that he had in the previous weeks.

“After we come back we have long weeks to prepare every weekend game. In those two or three weeks we will get the best form.”

There were two delays because of lightning in the area – one before kick-off and one in the first half – which resulted in the match being shortened to 80 minutes.

This fixture was the first soccer match to be played at one of the country’s top sport venues – Lambeau Field – home of top NFL team the Green Bay Packers.

After giving City the lead, Haaland looked as if he had made it 2-0 just before the break but his left-footed shot from inside the area was disallowed for offside.

City will now fly back to England and will take on Liverpool in the Community Shield at Leicester’s King Power Stadium on Saturday.