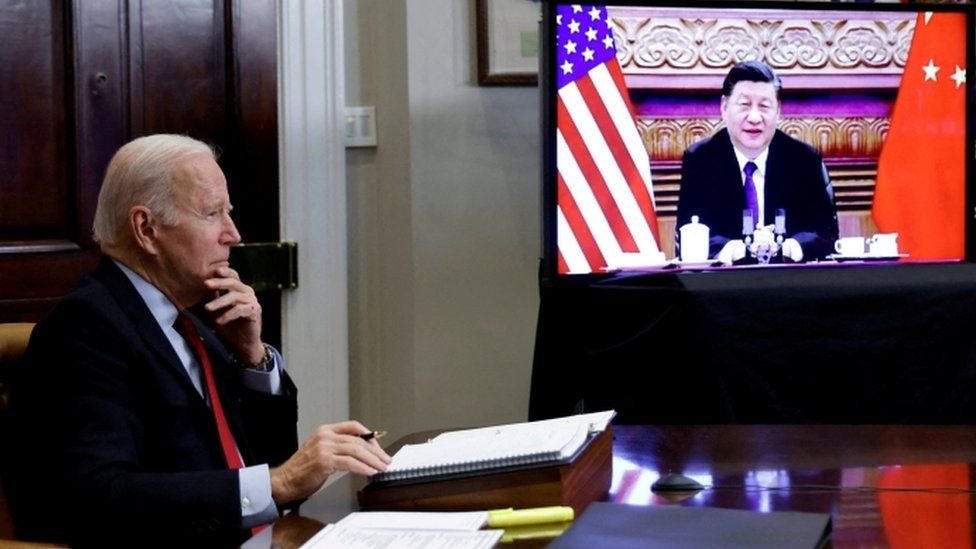 The US and Chinese leaders have held virtual meetings before

The US and Chinese leaders have warned each other over Taiwan during a phone call that lasted more than two hours.

The US policy on Taiwan had not changed, he continued.

According to Beijing, Mr. Xi warned Mr. Biden that “anyone plays with fire would get burned” and urged him to uphold the one-China policy.

Prior to a rumoured plan for US House of Representatives Speaker Nancy Pelosi to visit Taiwan, tensions over the topic have risen.

The state department claims that Ms. Pelosi has not made any travel plans, but China has threatened “severe consequences” if she goes ahead with the trip.

The White House has described Chinese statements against any such trip as “obviously unhelpful and not required,” despite Mr. Biden telling reporters last week that “the military thinks it’s not a good idea”.

Ms. Pelosi, who succeeds the vice president as the next in line for the presidency, would be the highest-ranking US official to visit Taiwan since 1997.

During their phone chat on Thursday, Mr. Biden and Mr. Xi also discussed setting up a potential in-person meeting, according to a senior Biden administration official.

They did not personally interact when Mr. Biden was president, but he hosted Mr. Xi during the Chinese president’s 2015 visit to the US.

China hasn’t ruled out the possibility of using force to annex Taiwan since it sees it as a separatist province that must reunite with the rest of the nation.

According to the White House, the two presidents also spoke on a number of other topics, including climate change and health security, in addition to Taiwan.

According to analysts, both Joe Biden and Xi Jinping want to avoid a public dispute, according to Barbara Plett Usher, the BBC’s State Department Correspondent. But neither has tried to change their opposing stories, as shown once more by their divergent accounts of Thursday’s call.

In a brief summary, the White House said it was part of efforts to “responsibly manage differences” and work together where “interests align.”

Beijing claimed that in a much longer one, many of their interests did coincide. But it pointed the finger at the US, criticising the Biden administration’s perception of China as Washington’s “most severe long-term challenge” and its “main opponent.”