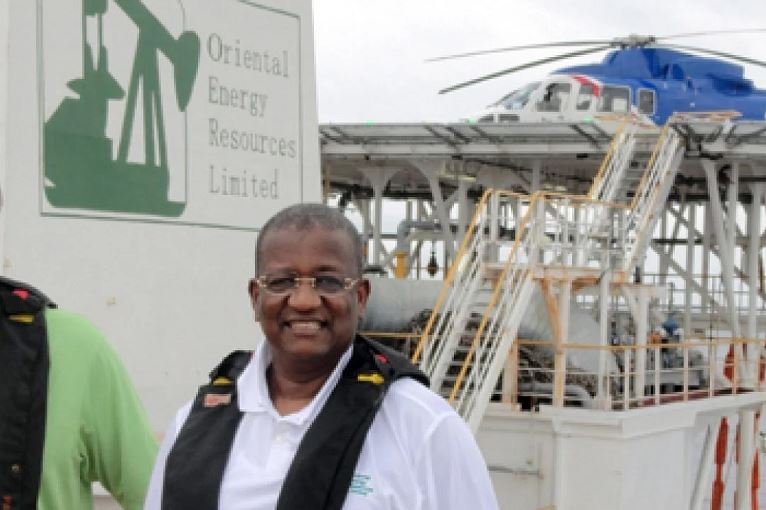 Justice Chukwujekwu Aneke presiding over a Federal High Court in Lagos has restrained oil exploration company, Oriental Energy Resources Limited, and 13 banks listed before the court, whether by themselves directors, officers, or agents, from withdrawing, transferring, removing any funds, properties or assets, outside the jurisdiction of Nigeria or encumbering any funds belonging to or held to the account of the company with the banks except for payments of normal salaries.

The court also said such payment must also be duly granted by the court upon request pending the hearing and determination of the motion on notice.

Justice Aneke also made an order restraining a Limited either acting alone or in concert with Central Bank of Nigeria and Nigeria Petroleum Development Company from exporting, transferring or removing from the jurisdiction of the court any asset, crude oil or gas due to the company from Ebok marginal field or any other oil block and/or transferring or diverting the proceeds there from and to any bank account outside the jurisdiction of the court, pending hearing and determination of the motion on notice.

An interim order was also made attaching and taking legal possession of all funds, deposit, credit, and receivables belonging to or due to the company with or in the custody of the 13 banks listed before the court, and directing each and every aforesaid banks listed, as affected parties, to within seven days from the day of service of these orders file an affidavit disclosing the respective balances, funds, deposits, credit and receivables, held in or the account of the company at the date of the order supported by a certified print out of the statements of accounts covering three months, pending the hearing and determination of the motion on notice.

The order of the court was sequel to an application filed and argued before the court by a Lagos lawyer, Barrister Uchechukwu Obi SAN, on behalf of the petitioner, Uniterm Nigeria Limited who alleged that Oriental Energy Resources Nigeria Limited is owing it the sum of $1,453,356,76 (one million four hundred and fifty three thousand, three hundred and fifty-six dollars seventy six cent).

In a 63-paragraph affidavit in support of the application sworn to by the general manager, Finance of Uniterm Nigeria Limited company, Adekunle Okunnowo and argued before the court by Mr Obi, it was alleged that Oriental Energy Resources Limited was desirous of engaging a consortium comprising of local and foreign contractors to provide it with a rig, specialized drilling unit and catering services required in the well drilling project for Ebok Field located within OML 67.

In the light of the above, the Oriental Energy Resources Limited contacted Borr International Operations Incorporated, a company engaged in the business of providing drilling services and one existing under the laws of
Marshall Island and having its registered office at Trust Company Complex, Ajeltake Road, Ajeltake Island, Majuro, Marshall Islands and the petitioner Uniterm Nigeria Limited as a consortium of foreign and local contractors for the project.

The petitioner was to provide local personnel, catering and incidental services on the rig location; while Borr was to provide the rig, drilling unit, and expatriate personnel for the project comprised in the contract.

The petitioner, Borr and the respondent as separate juristic entities fully aware of their roles, rights and obligations, entered into a business relationship in May, 2021.

The petitioner in association with Borr (simply described as the “contractor”) and same was for the provision of Jack Up Drilling Unit “NATT” Drilling Rig, local and foreign personnel supply and catering services for Drilling Program Offshore Nigeria in the Respondent’s Ebok Field in OML 67 aforesaid.

Although the said contract refer to the petitioner and Borr as “the contractor” it was understood by the parties that the contract was to be executed by them in such a way that each of Borr and the petitioner named as contractor in the contract, was to provide its individual and distinct services to Oriental Energy Resources Company and to invoice and get paid separately for the services rendered by each of them.

All of these duly issued invoices were sent directly by the petitioner to the respondent in accordance with the ordering and Invoicing process and most of them were received and honoured by the respondent.

The respondent however failed to pay six outstanding invoices all of which amount to US $1, 453, 356.76 VAT inclusive.

Sometimes in October 2021 the respondent had alleged that Borr supplied Borr Natt Rig’ had malfunctioned thereby leading to temporary stoppage of work within the period resulting to non-productive time (NPT) and consequential spread cost losses.

In the light of this, the Respondent had sent a letter to Borr on 14th October, 2021, informing Borr that they were disputing the service rates on Borr’s specific invoices, in view of the non-productive time (NPT) and spread cost losses.The letter was addressed to Borr which was simply copied to the petitioner.

The Respondent had struggled throughout the contract tenure to comply with the contractual payment terms of 30 days from final invoices submission dates as agreed, instead payments were mostly delayed and irregular and some remained outstanding to date. In each case the Respondent complained of its liquidity problems urging the Petitioner to exercise more patience.

Due to the persistent refusal of the Respondent to make payments to the
Petitioner, on the 6 outstanding invoices, the Petitioner wrote a letter to the Respondent dated 14th March, 2022 and 5th April, 2022, demanding payment of the outstanding debt of US $1, 453, 356.76 (One Million Four Hundred and Fifty-Three Thousand, Three Hundred and Fifty – Six Dollars, Seventy-Six Cents) Vat Inclusive.

The respondent’s claims and contentions against Borr which it now desperately uses as a ploy to refuse to liquidate the petitioner’s invoices are wrongful, baseless and insupportable under the existing contract executed by the parties.

It is therefore unfair that the Respondent is trying to assert its purported claim against Borr International Operations Incorporated as a ground to withhold the Petitioner’s funds under the invoices.

The Petitioner is entitled to the sum of US $1, 453, 356.76 (One Million Four
Hundred and Fifty-Three Thousand, Three Hundred and Fifty – Six Dollars, Seventy-Six Cents) Vat Inclusive, interest at the current rate

Owing to the repeated failure of the Respondent to honour its commitments, as a result of which the business of the Petitioner was put in jeopardy and near total collapse, the Petitioner, in compliance with the provisions of sections 571 (d) and 572 (a) of the Companies and Allied Matters Act, 2020 issued a statutory demand notice on the Respondent on 13th April, 2022 requesting the Respondent to pay the debt within three weeks from the date of receipt or face the consequence of winding up.

Although it received the letter on 14th April, 2022, the Respondent has failed to make the payments for the outstanding invoices till date thereby daring the machinery of the law.

The Petitioner is a struggling Nigerian service company grappling with high operational costs and overdue commitments with its lenders, employees and other stakeholders and this delay in settlement of the invoices has occasioned undue hardship on its operations requesting the Court’s intervention to protect its rights as an unpaid creditor under the law.

By its shifty and evasive conducts, the Respondent who has funds in Nigerian Banks including those listed before the court as affected parties would most likely transfer its funds and excess stocks of crude oil and gas out of those accounts or otherwise encumber them outside Nigeria and divert their proceeds to offshore bank accounts outside the jurisdiction of the Court, with a view to frustrating the instant winding up petition and render its outcome nugatory.

The Respondent has assets within the jurisdiction of this Court, but might deal with them so that they will not be available or traceable when judgment is given against it or otherwise frustrate the Petitioner from reaping the reward of the judgment.

In view of the obvious funding challenges facing the Respondent who may be owing other creditors, the available funds and receivables in its bank accounts due to it, receivables and stocks of crude oil and gas should be preserved towards the satisfaction of its indebtedness to Petitioner.

The banks listed hold cash deposits of the respondent and the respondent had received transferred funds in settlement of its past invoices from those banks at the instruction of the Respondent.

There is a real risk of the respondent’s assets being dissipated, hidden, or removed from the jurisdiction should the respondent become aware of these proceedings, thereby frustrating the outcome of this suit or any judgment the court in this winding up petition.

The petitioner/applicant is willing ready and prepared to give an undertaking as to damages in the event that those orders are granted and it is discovered that the court ought not to have granted the interim order sought in the first place.

In his ruling, Justice Aneke granted the restraining order.

Meanwhile, the suit against Oriental Energy Resources has been adjourned till 26th of September,2022 for hearing.