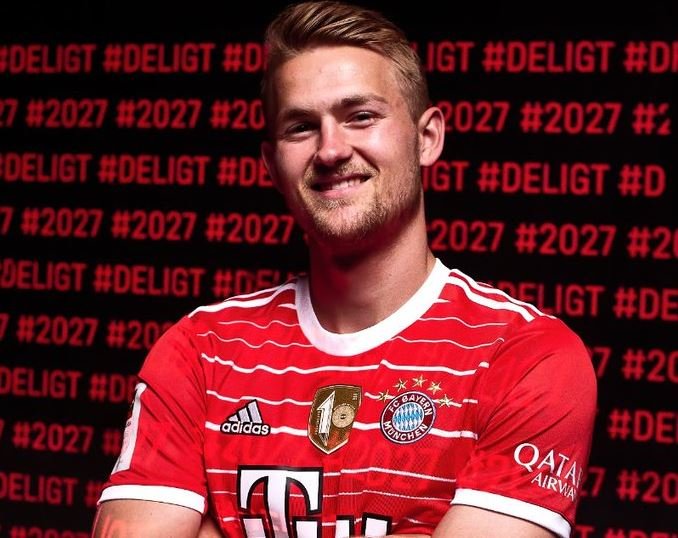 Bayern Munich have signed defender Matthijs de Ligt from Juventus for a fee believed to be around £68m.

The 22-year-old Netherlands international signed a five-year deal until 30 June 2027.

Herbert Hainer, Bayern president said De Ligt was a top priority for the club. “Matthijs de Ligt was a top target for us. With signings like this, the big aims that we have are achievable,” a statement on the club website said.

“The future face of our team is increasingly taking shape, and this transfer is an important building block in the overall concept that we’re gradually putting into place. De Ligt should become a mainstay at FC Bayern.”

“I felt the genuine appreciation from the sporting management, the coach and the board right from the start, which convinced me. On top of that, FC Bayern is a brilliantly run club with big aims. I’m very glad that I’m now becoming part of the FC Bayern story.”

De Ligt joined the Ajax academy at the age of nine and made his professional debut for the Dutch record champions in 2016 at the age of 17, scoring his first goal in the same game.

In general de Ligt has been an early starter: among other things he’s the youngest captain in Ajax’s history to date and the youngest debutant for the Dutch national team since 1945. In 2019, after a total of 117 competitive appearances (13 goals), he celebrated the double of the league and cup with Ajax before joining Juventus in Serie A.

He lifted one league title, one cup and one Italian Super Cup with Juve. He moves to Bayern after 117 appearances and eight goals in all competitions. At international level, de Ligt has 38 senior caps for the Netherlands and two goals.

Napoli: We will bring out the best in Osimhen