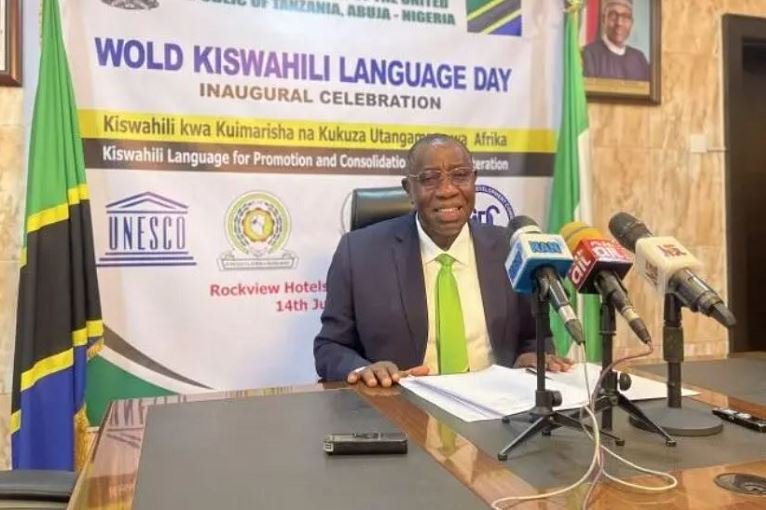 Dr Benson Bana, Tanzanian High Commissioner to Nigeria on Tuesday, said that the adoption of Kiswahili as Africa’s official language by the African Union (AU) will help unite, strengthen the continent and bridge diversities.

Bana made this known n Abuja at the pre-event news briefing ahead of the inaugural World Kiswahili Language Day celebration on July 14.

Bana said that the adoption of a working language among African countries will foster the integration of the AU agenda and the realisation of the African Continental Free Trade Agreement (AfCFTA).

The High Commissioner said that the AU adopted Kiswahili as the Continent’s official language in February 2022 because it is the most spoken language on the continent among almost three hundred million AU citizens.

Bana explained that adopting a common language in Africa will help bridge the diversities among countries of the continent, the diversities he further urged African citizens to leverage on positively.

“The reason why I think this decision would have been made a long time ago is to have a unifying factor, a language that unifies Africa.

“At the AU level, it is English, French, Arabic, Portuguese. Why not Kiswahili, why not Hausa.

“Having a common language today, Kiswahili is the right decision, at the right time and in the right direction. Let us live in our diversities but have a common unifying factor.

“All Tanzanians, we are about sixty million today but we all speak Kiswahili today, that has become our unifying factor. We sacrificed a lot, the languages of about one hundred and twenty-five tribes.

“They speak their mother tongue language fine, but we do not use those languages at the National level because they have divisive tendencies.

Bana however urged African leaders to embrace the AU’s decision to enable the continent have a unifying factor, the language to free citizens of member countries from the lingua divides created by the colonial masters.

The High Commissioner noted that the Tanzanian High Commission in Nigeria is also in talks with the Nigerian government and Institutions to incorporate Swahili into their learning curriculum.

“As we speak today, South Africa decided to introduce Kiswahili learning in its educational establishment, a bold decision. We need a language that will solidify, that will coheres the African continent.

“We are in the process of advising countries to choose Kiswahili as a learning package.

“We have been working closely with the Voice of Nigeria and they have already signed a Memorandum of Understanding with the Tanzanian Broadcasting Cooperation to share programmes in Kiswahili.

“If we start to convince our African countries that Kiswahili should become our lingua franca, our official language, I think we can go a long way.

“Now that we have established an African Continental Free Trade Agreement, under the auspices of the African Union, if our leaders stay firm, that will serve as headway to realizing the objectives of the AfCFTA,” Bana said.

Bana said that the High Commission will on July 14 in Abuja celebrate the Inaugural “World Kiswahili Day under the mandate of the government of the United Republic of Tanzania which is the home of Kiswahili.

He said that the event will be celebrated by all Tanzanian Missions abroad under the mandate of its government.

The News Agency of Nigeria (NAN) reports that on Feb. 10, 2022, the Summit of the AU Heads of State and Government officially adopted Kiswahili as the continent’s official language following a request from Tanzanian’s Vice President, Philip Mpango.

NAN also reports that the idea of Swahili as a pan-African language was pushed in the 1960s by Tanzania’s first President Julius Nyerere, who used Swahili to unify his nation after independence.