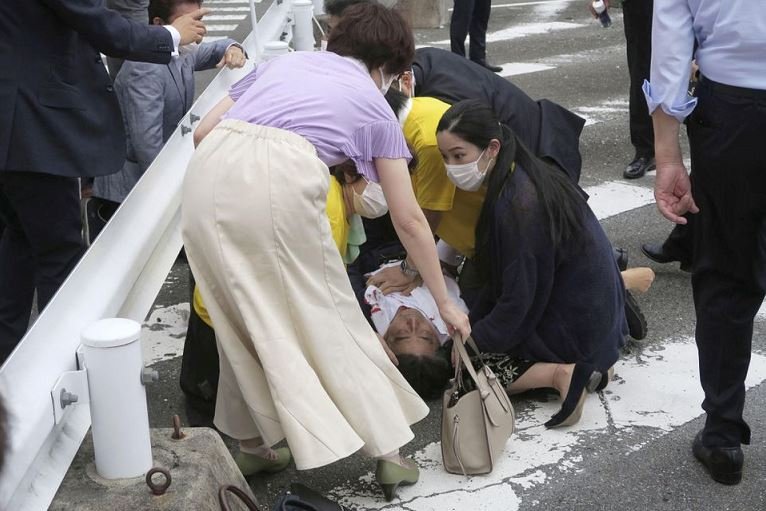 Japanese former Prime Minister Shinzo Abe was shot on Friday while campaigning for a national election the government said, with public broadcaster NHK saying he appeared to have been shot from behind by a man with a shotgun.

Police said a 41-year-old man suspected of carrying out the shooting in the western city of Nara had been arrested.

Kyodo news agency and NHK said Abe, 67, appeared to be in a state of cardiac arrest when airlifted to hospital, after having initially been conscious and responsive.

“Such an act of barbarity cannot be tolerated,” Chief Cabinet Secretary Hirokazu Matsuno told reporters, adding that Abe had been shot at about 11:30 a.m. (0230 GMT).

He said he did not know Abe’s condition.

NHK showed video of Shinzo Abe making a campaign speech outside a train station when two shots rang out, after which the view was briefly obscured and then security officials were seen tackling a man on the ground. A puff of smoke behind Abe could be seen in another video shown in NHK.

A Kyodo photograph showed Shinzo Abe lying face-up on the street by a guardrail, blood on his white shirt. People were crowded around him, one administering heart massage.

TBS Television reported that Shinzo Abe had been shot on the left side of his chest and apparently also in the neck.

Political violence is rare in Japan, a country with strict gun regulations. The gun used in the shooting appeared to be home-made firearm, NHK said.

In 2007 Nagasaki Mayor Iccho Itoh was shot and killed by a yakuza gangster. The head of the Japan Socialist Party was assassinated during a speech in 1960 by a right-wing youth with a samurai short sword.

“I thought it was firecrackers at first,” one bystander told NHK.

Police identified the suspected shooter as Tetsuya Yamagami, a resident of Nara.

But he has remained a dominant presence over the ruling Liberal Democratic Party (LDP), controlling one of its major factions.

Kishida suspended his election campaign after Abe’s shooting and was returning to Tokyo where he was due to speak to media at 0530 GMT.

The government said there was no plan to postpone the election.

The ambassador of the United States, Rahm Emanuel, said he was saddened and shocked by the shooting of an outstanding leader and unwavering ally.

“The US government and American people are praying for the well-being of Abe-san, his family, and the people of Japan,” he said in a statement.