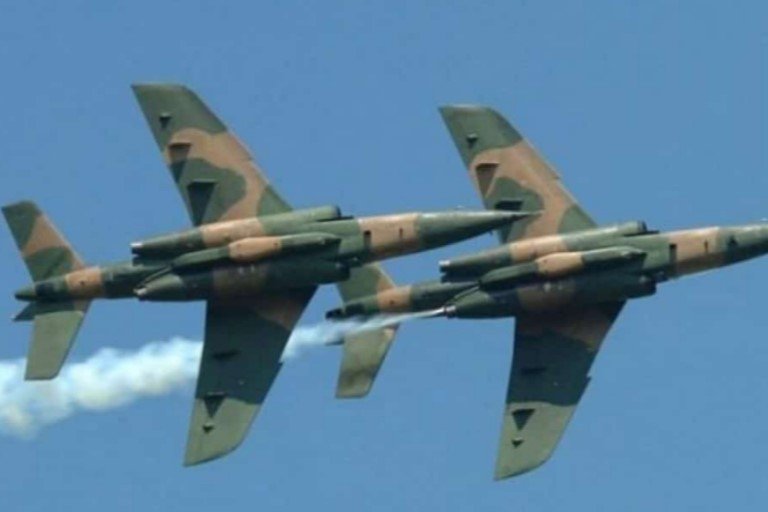 According to military sources, a NAF aircraft while on an air recce mission, received intelligence of the sighting of terrorists between Zakka and Umadan villages.

This is as the terrorists had earlier overwhelmed the police outpost at Zakka village after overrunning the police outstation at Dutsenma and shooting the Police Area Commander dead.

The terrorists had on the same day attacked presidential convoy in the state.

A Senior Airforce officer said the NAF aircraft thus proceeded to the location and after thorough scan of the area, the terrorists were eventually detected at a village about 7.1km West of Safana town and further west of Yartuda village.

He added that some locals were also sighted fleeing the village as the terrorists had ransacked and taken some of the locals as hostages during their house-to-house search of the community.

“The terrorists were later tracked until they had isolated the hostages to a building about a kilometer away from their massing up area near the village. It was at this point that the permission for an air strike was given.

“Subsequently, the location was struck by NAF aircraft in successive passes with scores of unsuspecting terrorists eliminated.

“Fortunately, as had been anticipated, the hostages were later seen escaping after the successful Air Interdiction by the NAF aircraft.

“The aftermath of the airstrike was that some of the villagers who had dispersed when the terrorists first invaded the village were seen returning.

“The villagers also confirmed that over 24 terrorists were eliminated in the carefully planned and coordinated air strikes,” the source said.

He added that a similar success was also recorded elsewhere in the same local government area as intelligence reports received in the evening of July 5, 2022 had revealed that some terrorists with herds of cattle were observed dispersed in Abdulkareem Camp near Mahuta village in Safana local government area of the State.

Abdulkareem, is a well-known terrorist kingpin, and has been a source of kidnapping and killings of innocent citizens residing near Mahuta village and environs.

“Consequently, a NAF aircraft was dispatched to the general area where it remained overhead the Area of Interest until the early hours of July 6, 2022 when the first human was sighted.

“Feedback received has indicated that the strikes were precise and successful.

“Efforts remain ongoing to locate and decimate other terrorists’ locations within Katsina and the entire Northwest,” he stated.