You're our winner, the Obama of Africa, Nigerians tell Osinbajo
Advertisement 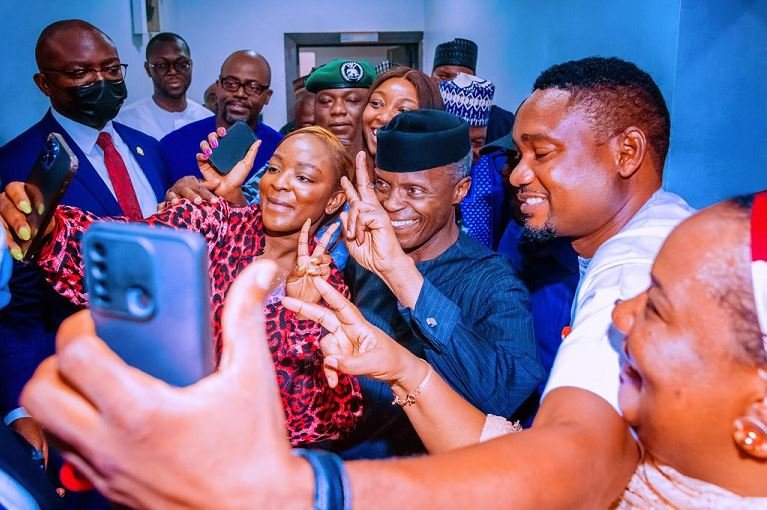 Vice President Yemi Osinbajo has been described as an inspiration, role model and the Obama of Africa by Nigeria for his brilliance and ability to deliver.

These were their views on Friday, at the Wuse, Abuja campaign office of The Progressives Project (TPP), a coalition of support groups that backed the VP for his presidential bid.

The Vice President, who arrived at the venue around noon on Friday, was greeted by an excited crowd of supporters and members of the various supporters’ groups already waiting.

They chanted PYO! PYO! as Prof Osinbajo made his way into the compound and to the elevated section, which had a large banner of the VP as background.

The VP thanked all his supporters at TPP and across the country for their dedication to the cause and passion for the birth of a new Nigeria.

He said, “This movement is a movement within a party also, we are not doing something that has not been heard of before. What is new is that we have a firm belief that a new Nigeria is possible and it is possible through us who are here.”

According to Prof Osinbajo, the movement for a new Nigeria has only just started and must remain strong and firm.

Speaking at the event, one of the leaders of an Osinbajo supporters group, Dr Ahmed Badanga, said the Vice President was “a role model to all of us.”

“You are the Obama of Africa. You have made us proud and we will continue to remain with you. I will urge all of us to remain steadfast and committed to this cause because we have a bright future ahead of us,” Badanga said.

Similarly, a member of the Coalition of Women for Osinbajo, Hajiya Rabbi Dauda, was effusive with her praise for the Vice President.

Prof Osinbajo polled third at the All Progressives Congress (APC) Special Convention for its Presidential Primary on Wednesday, June 8, 2022, coming third behind former Minister of Transportation, Rotimi Amaechi, and the flagbearer of the APC for the 2023 presidential elections, Asiwaju Bola Ahmed Tinubu.

Nevertheless, Dauda said, “Your Excellency, I stand on the authority of motherhood and I declare you a winner forever. We, the women of Nigeria, find it worthy to stand by you. Somehow, you are not the flagbearer today, but you will be the flagbearer tomorrow.

“I want to say to you that this is a continuous process, we will be waiting for you. We are here today to listen to you, to tell us where to go and what to do, and I tell you, we will all be waiting for you, tomorrow and always. Anytime you need us, all you need to do is to call on us and we shall be there for you.”

Also, another supporter, Mrs Diana Mary, said the Vice President has shown them (supporters groups) and Nigerians the right direction for the country.

“We are winners. We are not taking this for granted, you have led a direction that we will continue to follow and we are happy that for the sake of Nigeria you answered the call.

“Your Excellency the Vice President, thank you. We know that you went through a lot, and we know that a lot has happened in times past, and we believe that at this moment you will address whatever it is so that we keep going forward. We are not going to relax, I want to appeal that we still converge and speak about those things that we need to address so that we can pull a stronger force for Nigeria.

“This generation of Nigerians are looking for that force that will fight for their future. Your Excellency, I am speaking from a place of conviction, whenever you are alone and you think that it is a low moment, I want you to think of the numerous and thousands of us who are behind you and believe in your audacity, drive, and tenacity. You are the star that we know.”

Prof Osinbajo was also commended by the supporters for his indefatigable courage and confidence.

The supporter said, “The character you exhibited should be a subject to be learned by the youths. You are not just a role model but you are a movement that has touched every facet of this country.

“You might not be the flagbearer of our party but have it at the back of your mind that in Nigeria today, you are the flagbearer of every market woman, all the downtrodden, we believe in you. But we have agreed to sit and brainstorm and submit a report to you so that we can forestall a future reoccurrence of what has happened.”