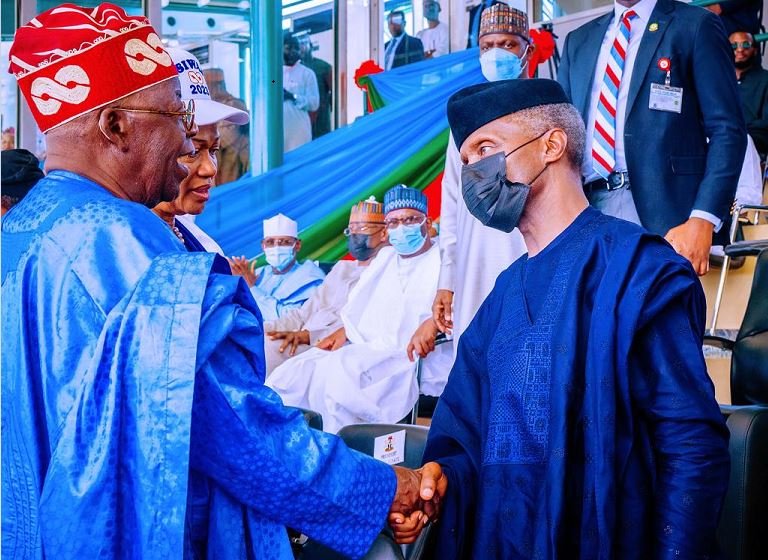 A member of the All Progressives Congress (APC) Election Management Committee at the primaries, Senator Abubakar Girei, has claimed that the actual winner of the contest is Vice President Yemi Osinbajo.

Girei also said those propagating the Muslim-Muslim ticket as running mate to Asiwaju Bola Tinubu in the party were propagandists for their selfish interests.

According to him, Osinbajo never encouraged vote-buying during the just-concluded presidential primary of the party won by the APC’s national leader, Asiwaju Bola Tinubu, with 1,271 votes.

However, the former lawmaker, who contested the position of the National Deputy Chairman (North) but stepped down to respect the consensus arrangement that brought in Senator Abdullahi Adamu, noted that, the presidential primary was free, fair, and credible.

Girei, while speaking to newsmen in Kaduna on Monday, said, “But I can tell you that the Vice President (Osinbajo) won the special convention without fear of contradiction.

“As the Vice President, he is an heir to the throne, a crown prince, who should have been given the right of first refusal in the contest in which he offered himself to serve the nation, and in which he had national acceptability.

“He (Osinbajo) had the best speech and his manifesto at the convention was the best. He identified problems and proffered solutions to them more than all other aspirants. For someone who had never contested any election before and with no politicking knowledge, to emerge third at the convention, I consider him the greatest winner of the convention.

“I have no doubt in my mind that Nigeria has lost the best presidential candidate that would have been produced.”

He added that in the “politics of today, it is very clear that the highest bidders always have their way and the election goes to not necessarily the best, but those who could buy their way in a cash-and-carry manner.”

While congratulating the former Lagos State Governor as the standard-bearer of the APC in the 2023 general election, Girei promised to work for the overall victory of the APC from bottom to top.

“As a loyal member of the APC, I will work for the total victory of my party’s candidates from bottom to top and I’m confident that our party will emerge victorious in the general election,” he said.

Noting that the Vice President was against vote-buying, Girei said “even his friends and associates who tried to help him could only do so without his knowledge or consent.”

“His teeming supporters are those of us who are committed to his ideals out of the convictions that he has the knowledge, experience, capacity, capability, mental and physical fitness, and all that is required to transform our dear nation to greatness.

“It may also interest Nigerians to know that PYO is opposed to monetisation of our democracy and politics, and has refused to encourage delegate or vote-buying.”

On the rumoured Muslim-Muslim ticket, the APC chieftain noted that it was an issue being championed by propagandists for selfish political interest, apparently by those who were neither good Muslims nor Christians.

“Politics, however, is all about winning strategy, so in my opinion, whatever strategy can be employed to win elections, that is within the confines of the constitution, to me, it is okay,” Girei added.