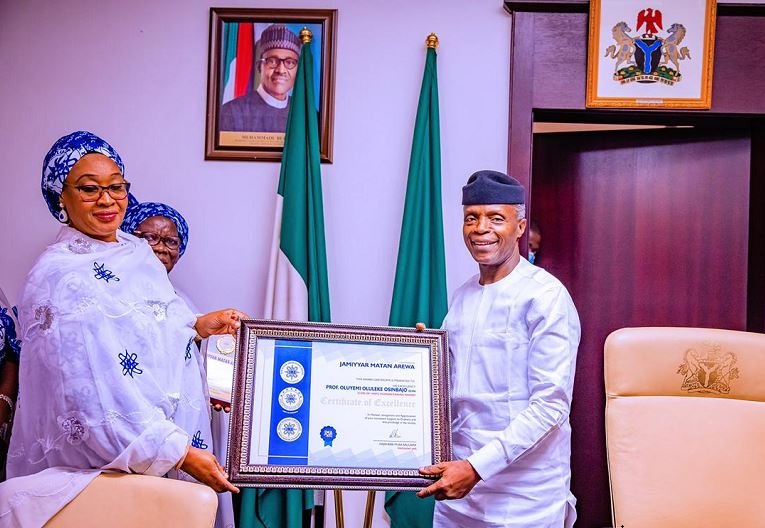 Vice President Yemi Osinbajo says it is important for the voices of women to be heard and for them to participate more actively in the development of policies in different sectors as they are major contributors to national development.

Prof. Osinbajo stated this today when he received at the Presidential Villa, Abuja, a delegation of Jam’iyyar Matan Arewa, the association of women in Northern Nigeria.

At the meeting, the Vice President was also presented with the Association’s Icon/Humanitarian Award, in recognition of the VP’s support to the less privileged in society and especially children orphaned by the Boko Haram insurgency in the North East, particularly through the North East Children’s Trust, an initiative championed by Prof. Osinbajo, which set up The Learning Centre in Maiduguri.

While appreciating the group for the award, the Vice President stated that “it is important that your voices are heard very clearly, it is an economic issue. No country in the world has attained economic development without giving equal opportunities to women. Every wealthy nation in the world that has attained greatness has done so because women in that nation were accorded equal rights and opportunities.”

Urging for more collaboration between government and similar private and civil society organisations in addressing issues related to the welfare of children, and girl-child education, among others, the VP further stated that “it is important that the private sector and civil society organisations such as yours, focused on women, participate more actively in developing policies because you are right there, so it is important to collaborate more.”

The Vice President also mentioned the proposed 35 per cent affirmative action for women to be given elective and appointive positions in government, noting that “there is a need for women to be properly recognized and given the rights in society.”

Prof. Osinbajo highlighted the work being done by the At-Risk Children Programme, ARC-P, a Federal Government led initiative in addressing the challenges faced by the vulnerable in society, especially children and young people, nationwide.

(The ARC-P is led by Mrs Maryam Uwais, the Special Adviser to the President on Social Investments.)

In her remarks, the President of Jam’iyyar Matan Arewa and leader of the delegation, Hajiya Rabi Musa Saulawa, said the association of Northern women embraces all women in the Northern region regardless of their tribal and religious differences.

She added that it was founded in 1963 to unite Northern women and improve their standard of living socially and economically, and has branches in all the 19 Northern States and the FCT.

Appreciating the VP for his dedication and commitment to humanitarian causes such as the orphans in the North-East, Hajiya Saulawa said, “this is the kind of leadership our nation deserves, where region, tribe or religion does not dictate the direction of government policies and initiatives. It is as a result of this commitment and dedication that Jam’iyyar Matan Arewa, an institution that looks after orphans, has also decided to honour His Excellency with the JMA humanitarian award.”

While also acknowledging the humanitarian work of the wife of the Vice President, Hajiya Saulawa prayed for God’s blessings on the VP and his family.

“Your Excellency, Northern women and children are indebted to you for taking care of our children. All we can do is to pray for you that the Almighty God will bless you and your family abundantly,” she added.