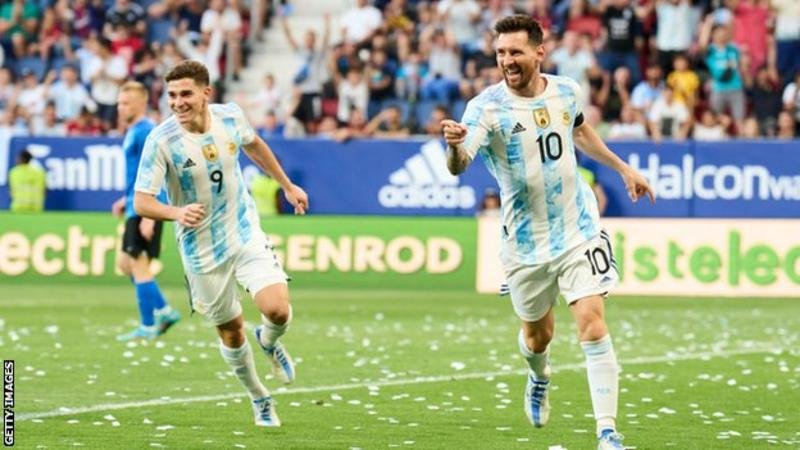 Lionel Messi scored all five of Argentina’s goals as they continued their fine form by thrashing Estonia in a friendly in Pamplona, Spain.

The Argentines swept aside Italy 3-0 in the Finalissima – a game between the champions of Europe and South America – on Wednesday.

Messi provided two assists in that game and he was once again in vintage form.

He opened the scoring with a penalty and his fourth moved him above Ferenc Puskas who scored 84 goals for Hungary.

It is the first time the 34-year-old has scored five in a game for his country. In fact, he has only ever achieved the feat once before in his career, in a 7-1 win for Barcelona over Bayer Leverkusen in the Champions League in 2012.

He would have been closer still to Ronaldo, but the Portuguese scored twice in his country’s Nations League win against Switzerland on Sunday.

Messi’s goals in Pamplona demonstrated his vast array of skills.

He put Lionel Scaloni’s team ahead with a calm penalty after eight minutes, then doubled the lead with a powerful side-footed effort into the roof of the net from a tight angle.

His third was a predatory finish, showing his trademark precision to direct Nahuel Molina’s right-wing cross into the bottom corner from 12 yards.

His fourth owed much to his alertness. As other players stopped and anticipated a free-kick award that never came, Messi picked up a loose ball, drove into the box, produced a dummy which left the Estonia keeper and a defender lying on the ground and rolled the ball into the empty net.

He concluded his remarkable performance when he was again quickest to react to a loose ball and slotted in a low finish from next to the penalty spot with 14 minutes remaining.

While Estonia did not provide the sternest of tests, this result – coupled with the victory over Italy, their unbeaten World Cup qualifying campaign and last year’s Copa America triumph – suggests Messi could yet have a great chance of winning the World Cup, the one trophy that has eluded him in his glittering career.